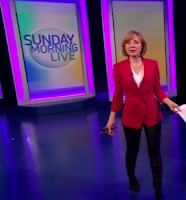 Today's Sunday Morning Live had a somewhat baffling segment which focused specifically on whether interfaith marriages should be allowed to take place in Sikh places of worship.

Some traditionalist Sikh protestors here in the UK have started disrupting such weddings - actions that sound completely beyond the pale to me and which must be deeply upsetting for the marrying couple and their poor families.

Jagmeet Singh, a supporter of the protests, appeared on the programme.

He argued that interfaith marriage per se is wholly acceptable to him, he has no problem with it, and that such couples, following their marriages, are also fully welcome to receive a blessing in a Sikh temple but that the traditional Sikh wedding rite itself ought to be reserved for Sikhs marrying Sikhs - a traditionalist position that didn't seem particularly surprising to me or that extreme (in religious terms) either, especially when put as gently as Jagmeet put it here.

He was, however, very much alone in that belief on SML, with all of the other four guests and presenter Sian Williams disagreeing with his socially conservative position on this matter, often vigorously taking him to task over it. Sian repeatedly repeating (at one stage) that love should be everything (as indeed it should).

It was after that discussion closed, however, that things got out of hand as this young Sikh man stood up and interrupted Sian's introduction to the next feature - an interview with director David Puttnam.

He was protesting about what he and many other UK Sikhs, it seems, see as the media's abject failure to report the killings of Sikhs in in Punjab by the Indian police. (Not killings by Muslims, as some have mistakenly assumed).

I have to say on watching I could see that Jagmeet was completely out of order here from the BBC's perspective and that Sian was only doing her job in trying to shut him up. [An interview with David Puttnam was being introduced after all, and that should never be interrupted (not even for the four-minute warning of a nuclear strike)]. 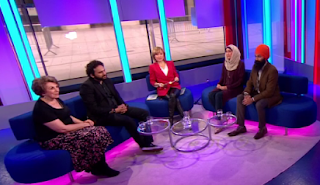 Her tone, however, did take me aback a little, sounding (I thought) somewhat as if she was telling off a naughty child.

It also crossed my mind that had he been a protesting Muslim she wouldn't have dared speak to him like that. (Of course, I  might be wrong about that).

Unfortunately for Sian though, it looks as if the whole Sikh community of Great Britain and Northern Ireland was watching and has now taken to Twitter to denounce her (though, as ever, that could just be a Twitter illusion).

Minute after minute tweets have been pouring in ever since this morning's programme calling her rude and unprofessional. She's been on the receiving end of an absolute onslaught today...

...which can't have been pleasant - though I have to say, from what I've seen, that Sikh tweeters are hugely less sweary and personally abusive than many other vocal Twitter 'communities'. (They are 'respectfully aggrieved', so to speak).

Quite a few British Sikhs have long felt the BBC to be biased against them and, as I've said before (more than once), I can see why at times and it doesn't look as if this morning's Sunday Morning Live will have helped in that respect.

Still, though Jagmeet was put in a five-against-one situation throughout, that's not what was being complained about here.

All the Twitter complaints focus on Sian's 'rudeness' to him over his anti-Indian-authorities protest.

I can see why they felt she was rude but, unlike them, I can also see why Sian felt she had to be 'rude' to him.
Posted by Craig at 23:13