Another own goal from the BBC

So, John Whittingdale, one of the BBC's sternest critics in parliament, has been made the new Culture Secretary. (A very interesting move by David Cameron that.)

And the increasingly cack-handed BBC has already scored an absolutely idiotic own goal in response.

As the Daily Mail reports (though it looks as if Guido Fawkes may have got there first)...

...some trigger-happy buffoon in the BBC Press Office thought it appropriate, on hearing the news of the new Culture Secretary's appointment, to re-tweet an attack on Mr Whittingdale on the BBC's official Press Office Twitter account.

They then quickly deleted the offending re-tweet. 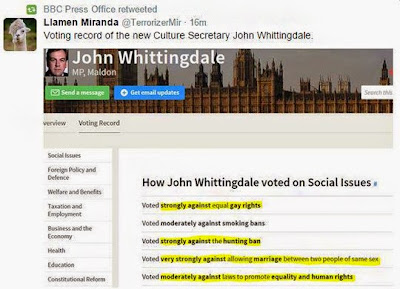 Another scolding email from Mary Hockaday to BBC staff is probably due, warning them - yet again! - to watch what they tweet and re-tweet lest they damage the BBC's reputation.

Given Mr Whittingdale's appointment it may already be a bit too late for that.
Posted by Craig at 17:19