The most outrageous example of a bad BBC headline so far.: 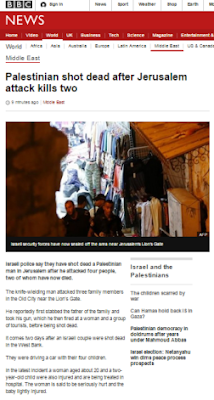 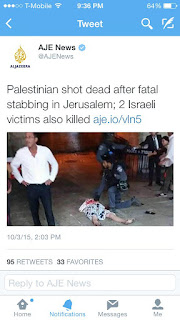 al-Jazeera’s headline was bad too, but in a way, slightly less bad, and like the BBC, they did amend it after complaints.

Although al-Jazeera, (like the BBC) prioritised the shooting of the Palestinian, at least they didn’t blame ‘Jerusalem’ for  attacking and killing ‘two’, and they did mention that there were ‘victims’, and that they were ‘Israeli’. (Someone said the headline was misleading as it might look as though these were two separate incidents)

“Following the outcry, the network apologized and revised the headline to read, “Two Israelis killed in stabbing attack; Palestinian suspect shot dead.”An al-Jazeera editor on Sunday wrote that the network “regretted” the wording of its headline and tweet of the attack, saying it appeared “to minimize the killings of the Israeli victims and leaves out the context that the Palestinian man was their attacker.”

The editor said al-Jazeera was alerted to the post after “many people in our audience pointed out” its problematic nature. It said the post was written “under the pressure of breaking news.”

I shouldn’t need to remind you that al-Jazeera is not under the same obligations as the BBC, and being a Qatari station, is pro-Palestinian.

The BBC, on the other hand is British, and is supposed to be impartial. That is to say, even if the BBC sympathises with the Palestinians it is supposed to report events unspun.

The BBC’s headline did undergo a number of changes, from the aforementioned

Palestinian shot dead after Jerusalem attack kills two
to:
Jerusalem attack: Israelis killed in Old City ‘by Palestinian’
after which they updated it by removing the quotation marks (why were they there in the first place?)
and eventually settled for:
Jerusalem: Palestinian kills two Israelis in Old City
which does, at last, do what it says on the tin.
I won’t go into the content of the report now because Hadar does that at BBC Watch.

“The network, which has a long history of alleged anti-Israel bias, claimed in its defense that the headline in question was written by a junior editor and was not the result of an anti-Israel agenda.
The BBC issued an official response Sunday saying the network “identified that the headline didn’t accurately reflect the events, nor the details reported in our online story, so changed it of our own accord.”

It is obvious to me that people at the BBC - editors, reporters, juniors, seniors Uncle Tom Cobley and all  - identify with the Palestinians to such an extent that the particular thing they find most concerning about this incident is that a Palestinian has been shot. Especially if the Palestinian has been shot by an Israeli. The fact that, in this instance, said Palestinian had been on a killing spree and his victims were Israelis was secondary, because both the BBC hierarchy and the rank and file are of the same mind. They see present-day Israelis as European and American interlopers and colonizers of what is officially ‘Palestinian / Arab / Muslim land’. They assume their audience sees it that way too, and sadly, a good many of the the audience does so simply because that is what the BBC has led them to believe.
If the BBC was truly impartial and willing to give their reporting the unique balance of which they constantly boast, they would have informed viewers that Mahmoud Abbas openly incited the latest escalation of Palestinian terrorism, both  before and during  his UN speech.

"We bless you, we bless the Murabitin (i.e., those carrying out Ribat, religious conflict/war to protect land claimed to be Islamic), we bless every drop of blood that has been spilled for Jerusalem, which is clean and pure blood, blood spilled for Allah, Allah willing. Every Martyr (Shahid) will reach Paradise, and everyone wounded will be rewarded by Allah. The Al-Aqsa Mosque is ours, the Church of the Holy Sepulchre is ours, and they have no right to defile them with their filthy feet. We will not allow them to, and we will do everything in our power to protect Jerusalem."
[Official PA TV Sept. 16, 2015]

He is so confident of the media’s compliance that he doesn’t even bother to make much of a secret of it. 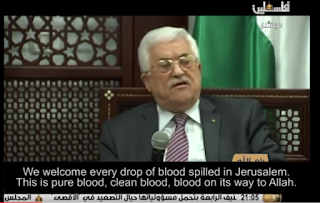 The Israeli Prime Minister Benjamin Netanyahu made an important speech at the UN, which the BBC could have reported or broadcast live, but no. They reported it under another great headline:

Netanyahu’s UN speech fails to win over the media.

Instead, they brought us sympathetic reports of the raising of the Palestinian flag, an empty, symbolic gesture that, at best might have made everyone on the left ‘feelgood’.  Virtue signaling, I think they call it.