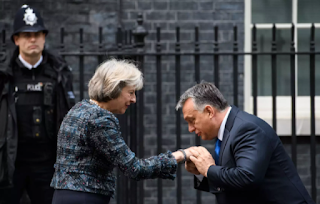 "OK, you're trying to get off Viktor Orban, and I can exactly see why. Let's remind ourselves who he is. He is a very, very authoritarian right-wing leader of Hungary. He's called migrants "poison" and Muslims "invaders". He's widely regarded as anti-Semitic, for good reasons. He's made it a criminal offence for lawyers to help asylum seekers, and he's targeted the media, the judiciary and NGOs in a very,very aggressive way. This is the man that your party in the European Parliament has decided to support. Why?"

Re The Andrew Marr Show, there were plenty of left-wing people on Twitter complaining that there was "no mention" of Tory MEPs voting against the European Parliaments censure motion against Viktor Orban's Hungary. ("Usual Tory bias on this programme", "BBC bias in a nutshell", etc).

And then, after they'd all sent out their tweets, what came along? Yes, a very big "mention" of that very thing.

Oddly, none of them graciously withdrew their earlier tweets.

As well as being interesting for Michael Gove's attempts to deal with the question, it's also interesting for Andrew Marr's description of the Hungarian leader (quoted separately, in italics, above). He certainly didn't sit on the fence:

Andrew Marr: There is one bit of really good political news for the government from Europe this morning, one leader who said, "We would like a fairer Brexit because we love the British and have always cooperated well. You deserve a good deal". Are you pleased to have the support of Viktor Orban of Hungary?

Michael Gove: I think the truth is that there are actually a swathe of EU leaders who want the best possible relationship...

Andrew Marr: (interrupting) Let's stick with that one.

Michael Gove: Well, I think one of the things is that I'm not a...what's the word?...It's not for me to rank a league table of EU leaders and to say 'that one is my favourite' or 'that one I have less time for' because I believe in cooperative diplomacy, I believe in generosity of spirit towards our EU partners and I would say that there have been a range of EU leaders, all of whom have said they want to ensure that they have the most positive relationship afterwards. Indeed, Michel Barnier himself said that he wants to have a relationship with the UK which is the best relationship between the EU and any third country.

Andrew Marr: (interrupting) OK, you're trying to get off Viktor Orban, and I can exactly see why. Let's remind ourselves who he is. He is a very, very authoritarian right-wing leader of Hungary. He's called migrants "poison" and Muslims "invaders". He's widely regarded as anti-Semitic, for good reasons. He's made it a criminal offence for lawyers to help asylum seekers, and he's targeted the media, the judiciary and NGOs in a very,very aggressive way. This is the man that your party in the European Parliament has decided to support. Why?

Michael Gove: No. That's not true and...

Andrew Marr: (interrupting) But it is true.

Michael Gove: No, it's not true Andrew and it's critically important that we realise this. There was a vote in the European Parliament but it's a long-standing principle of a number of MEPs from different countries and from different parties not to believe that the European Parliament should interfere in or censure the internal democracy of a particular country. Now you or I...

Andrew Marr: (interrupting) Even one engaging in this kind of thing?...

Michael Gove: Just one second...You or I might have particular views about other countries but the European Parliament and those within it, British MEPs and others, believe that that's the wrong way of expressing criticism. But there's another thing as well... My view is the British are traditionally accused of playing divide and rule and picking off individual countries...

Andrew Marr: (interrupting) This is a man who is so illib...

Michael Gove: ...and you do as well. I not going to be drawn on my views about individual European leaders.

Andrew Marr: Because you need his support?

Michael Gove: No, because I think it would be wrong for me as a time when we need solidarity against a number of different threats - you mentioned anti-Semitism - we need to make sure that our voice is clear, our position on these issues is absolutely clear and resonant, and I don't believe that individual criticisms of the kind that you are understandably tempting me to make necessarily help us in ensuring we get both solidarity on the issues that count and the best deal for Britain as we leave the European Union.

Andrew Marr: I suppose the point I'm making, in a circuitous way, is that we have had a lot of conversations in this country about anti-Semitism in British politics and Jeremy Corbyn has been under a lot of criticism for that. Here you are as a party voting alongside the most prominent anti-Semitic politician, xenophobic politician, somebody who, as I say, has described migrants as "poison", and that's been the Conservative Party's...

Andrew Marr: (interrupting) You voted with him.

Michael Gove: No, it's not the case we voted that we voted to support him. It's the case that the MEPs declined on this occasion, as they have on a number of occasions in the past, and there were people from a variety of different parties and a variety of different countries that declined to do so. This is very, very far from endorsing or supporting the position he takes.

Andrew Marr: So why does your good friend, long time friend, Danny Finkelstein, Lord Finkelstein, a Conservative peer, describe this vote as "very distressing" and "a shameful thing to have happened"?

Michael Gove: Well, I have enormous respect for Danny and I wouldn't criticise Danny.


I don't think Andrew Marr and Viktor Orban will be exchanging Christmas cards this year.
Posted by Craig at 14:44