"I do not enjoy being mocked"

Last night's Mock the Week began with politics and zoomed in, as BBC comedy usually does, on Big Bad Boris. And then it turned to Labour. So I got out my trusty stopwatch and started comparing the times. And then this happened:

Dara Ó Briain: None of this is any more ridiculous than hearing John McDonnell treat the "call off the dogs" as being as seriously calling Labour supporters dogs. That was possibly a low point. And it probably would be, honestly, to the Labour Party, "Oh, my God, would you get your head out of your collective arses? There is a national debate going on." But this was particularly funny to watch him go, "Uh, you called us dogs!" No! It was a metaphor. You know! It's a common turn of phrase.
Deborah Frances-White: Do you think he goes to work and literally crouches in the shadow of a filing cabinet because he can't understand the metaphor?
Dara Ó Briain: Do you think all the time he's slightly out of the light? [Sinister voice] "I am The Shadow." No, John, it's just a title. [Sinister voice] "No! For I am The Shadow".
Rhys James: Especially as someone who's been accused of institutional racism - don't call him a dark horse, he'll lose his shit.
Milton Jones: Corbyn's been accused of anti-Semitism but he's promised to learn Hebrew in "Jew" course.
Dara Ó Briain: Have you had the pleasure of an attack ever by those Corbyn supporters who are quite attack dog about the whole thing? Have you ever had the online joy of their company? Even as we say this - and I'm looking straight down the lens at you. There is somebody with a stopwatch at the moment timing how much time we spent on Boris Johnson versus how much time we spent on the Labour Party. There's literally a tonne of those people and they write in going, "Well, er, 6 minutes, 37 seconds and then the Labour Party had 7 minutes, 14 seconds. BBC bias!" Literally, you are doing it right now, you are doing it right now. I want you to own the moment, own the moment that I look down the lens at you and say, go on, look at you, look at the screen, watch the seconds tick up, watch that, right, as I'm talking, directly to you, you big eejit. Right. I got in grief once because we mentioned - cos we will be mentioning - we mentioned that Corbyn and the ineffectual thing that Corbyn did and somebody went... Someone tagged me into a Tweet going, "Well, clearly Dara Ó Briain despises the poor."
Deborah Frances-White: To be fair, you're well known in comedy circles for despising the poor.
Dara Ó Briain: OK, but they don't know that. They don't know that I do actually despise the poor.

As Dara was talking about Corbynistas with stopwatches rather than me, I relaxed, clicked the start button on my fancy stopwatch again and just enjoyed the moment.

The Corbynistas, with or without stopwatches, appear to have enjoyed it less. This was my favourite reaction from an Israel-loathing, IHRA-definition-of-antisemitism-despising, Morning Star-reading, BBC-bashing Corbyn cult devotee called Jenny - and, yes, she was being deadly serious: 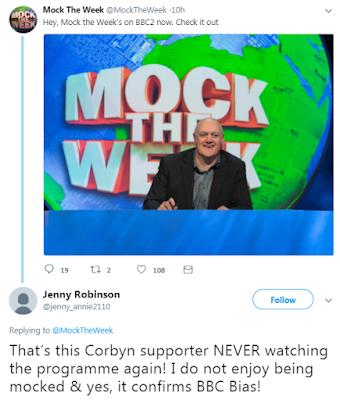 I think that calls for a: