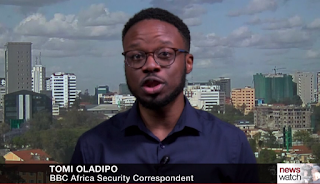 This week's Newswatch was interesting but odd.

It began with a couple of complaints about 'the #honestmistake tweet' sent out by BBC World after a BBC reporter misheard what President Trump had said to the UN and tweeted that he'd said "war to come" vis-à-vis Iran rather than "more to come", with the BBC compounding the 'mistake' by leaving the incorrect tweet up long after posting a correction - naturally, with the wrong tweet 'going viral' and the correction not 'going viral'. And then Samira segued to another item:

That error led to cries of fake news and that charge was levelled again after this shocking video featuring soldiers in Cameroon began to circulate widely in July.

This proved to concern an accusation of fake news against the BBC which the BBC has now proven to be anything but fake news.

It's a fine piece of BBC journalism, and you can read all about it here.

The odd bit is that no Newswatch viewer appears to have commented about the BBC's Cameroon coverage. This was just Newswatch paying tribute - over several minutes - to a great piece of BBC reporting. It seemed to be going out of its way to prove that some claims of 'fake news' about the BBC are themselves fake.

And the other main segment of the programme was given over to discussing a new BBC project to better handle traumatised members of the public. And it featured a couple of unspecific (non-recent) tweets complaining about journalism in general (rather than about the BBC).

Is Newswatch there to randomly hand out bouquets to the BBC or discuss projects that reflect well on it? Isn't it supposed to be about viewer's opinions of the BBC, both critical and complimentary?

I hope new editor John Neal isn't going to make a habit of this.
Posted by Craig at 05:47