"The problem for Mr or Ms Anonymous is that you weren’t elected to decide. Donald Trump was" 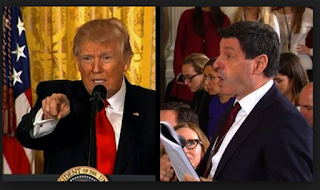 Jon Sopel has written a piece for the Mail on Sunday that may surprise you. In it, the BBC's North America editor slates the writer of the anonymous New York Times attack on President Trump:

So what legitimacy does the writer have in declaring that he or she is the guardian of US democracy? For better or worse, the ballot box is where elections are decided and in November 2016 the American people spoke.

If you are that unhappy about the administration’s direction of travel, you have the choice of resigning and fighting the Trump agenda at the next election.

Or you stay and argue your corner. But if you lose the battle while fighting from within, your duty as a public servant is to enact the policy that has been agreed.

And he seems to concede that he might have been wrong in earlier dismissing Donald Trump's claims about the 'deep state' being out to get him:

There are two other things Trump said repeatedly during the campaign, which were designed to appeal to those who always love to smell conspiracy: there was a ‘deep state’ – powerful, but secret forces at the heart of the establishment – and that Washington was a swamp that needed to be drained.

Lurking around every neo-classical column were bad actors whose allegiance was to the status quo, who would thwart the newly elected President and scupper him as if their lives depended on it.

At the time, I thought it was tendentious in the extreme, designed to show that Trump was the non-politician in the race, the change-maker and people’s tribune taking on the deeply entrenched elites.

Yet the New York Times article can be seen as the very definition of the deep state.

Wonder what Anthony Zurcher and Katty Kay will make of this? Will they be re-tweeting links to it?
Posted by Craig at 07:41