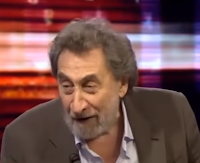 If you've a spare few minutes, please have a read of this very fine speech by Howard Jacobson, published in the Jewish Chronicle. It's English irony at its best, worthy of Dickens.

Something tells me you're expecting me to call Jeremy Corbyn an antisemite. There's been a bit about it in the press, and I... well, you know...

Am I being ironical? Ladies and Gentlemen, I'm incapable of irony.

We know what an antisemite look like. He wears jackboots, a swastika arm-band, and shouts Juden Raus; Jeremy Corbyn wears a British Home Stores vest under his shirt and is softly spoken.  Antisemites accuse Jews of killing Jesus; Corbyn is an atheist and seems not to mind if we did or didn't. Whether that's because Jesus was Jewish and killing him meant one less Jew in the world, is not for me to say.  And - and - he doesn't deny the Holocaust...

Mind you, he knows a man who does.  In fact he knows a surprising number of men who do. That he denies ever having been in their company - until photographs turn up of him rubbing noses with them at the gravesides of mass murderers, offering to show them his belief systems if they'll show him theirs - 'Gosh, they're the same size!' - should come as no surprise. You can't spend your whole life in the company of blood-libellers and holocaust-deniers and expect to remember them all by name.

It would be wonderful if he could reprise that for Radio 4's A Point of View. They allow controversial pieces about Brexit after all, including from (anti-Brexit) Howard himself. But I don't think that's going to happen. However powerful it is, I suspect the BBC will consider it too party political and - thinking of the Corbynista mobs - run a half-marathon away from it. Maybe Andrew Neil's This Week then?

And, while we're in a Howard Jacobson mood, I very much enjoyed his Radio 3 Free Thinking lecture on the continuing importance of the novel. Blogs, of course, it goes without saying, are more important, but it's still definitely worth a listen nonetheless.
Posted by Craig at 17:20