All around me are familiar faces 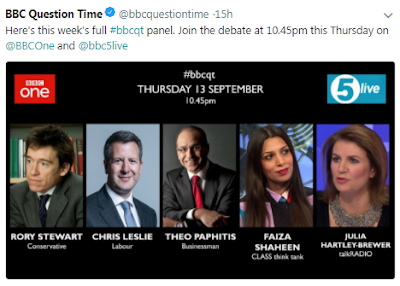 Oh dear, BBC Question Time's announcement that Julia Hartley-Brewer would be joining the panel tonight didn't go down well the Twitter mob. Not one bit.

Huge amounts of bile flew at the hated Julia and accusations of bias against the BBC spewed forth like vomit from the massed hordes of Hell (to go all 'Norman Smith' for a minute!).

Separate tweets actually went out announcing all five guests. The numbers of replies each got is very revealing:

That said, Labour's anti-Corbyn MP Chris Leslie got the second-most-hostile response because, of course, he's "a Tory".

'In fact', according to many a Corbynista on Twitter overnight, there are actually"4 Tories" on the panel - five if you count David Dimbleby! (Now where have I heard that kind of thing before?)

A less heated take on this can be found in the following Twitter exchange, involving the BBC's famous head of live political programmes:


Minnie Rolfe: Return of 'Marr', Hartley Brewer on paper review, return of BBC Question Time, Hartley Brewer on panel, this is NOT balance. Who is responsible for this - Rob Burley?
Rob Burley: John Neal is the Editor of 'Marr', Hilary O’Neill of 'Question Time'. But the fact someone you don’t like is on either programme tells us zero about balance. Soz.
Minnie Rolfe: The BBC after a break has the return of two of its flagship political programmes. The programmes take place within days of each other and the same journalist is platformed on both programmes. My likes and dislikes are NOT the point, don't you see that Rob Burley?
Rob Burley: You are making a point about someone being on too much. That’s a view and it’s fair enough. But it has nothing to do with balance or bias.
Minnie Rolfe: 'Being on too much' isn't a good summary of my point. Neither of these flagship political programmes has been on for weeks, first week back, days apart, same journalist on both programmes. Does anyone at BBC have an overview of who is platformed to avoid this? it's not OK surely
Rob Burley: When say “platformed” guess you mean on telly. You seem to be asking, perfectly fairly, why 2 programmes have the same person on so soon after each other. And whether should be more coordinated. Perhaps so, variety is good. But this has nothing to do with bias or balance.
Minnie Rolfe: BBC has great reach and influence, so if a journalist or politician is more frequently or intensively platformed by BBC, or 'on the telly' if you prefer, their views and opinions are being signal boosted by BBC. This is about more than 'variety'....but variety is good.

Others noted that Minnie (no relation to Leyla Reynolds from the other night's Newsnight) might have missed something:


Ian Collier (to Minnie Rolfe): And Faiza Shaheen is OK I guess because she sings from the correct playbook?
Mike Davies: Yes - Faiza Shaheen was on 'Politics Live' earlier today.

Minnie didn't reply to that but the gents have a point there. Faiza has been on Question Time, Politics Live and the Marr Show over the past two weeks, but the mob haven't kicked up a fuss about her being "platformed" too often.


dave M: Can you not get more people from a wider pool on all sides? It does get pretty nauseating seeing the same old faces jump from program to program.
Rob Burley: Have a watch of 'Politics Live' - loads of new faces.
dave M: Yep like the new format... but no one I’ve not seen from the studio circuit. Appreciate that's inevitable to a degree but QT has worst repetition.

Both are correct there, but only up to a point. Politics Live has featured some new faces but, as dave M says, most have been from 'the studio circuit'.

(I like the new format too, by the way).

And there's definitely something to his point that "the same old faces jump from programme to programme". Having "loads of new faces" might, indeed, prove refreshing.

Anyhow (he says, without blinking), guess who was on Newsnight for the umpteenth time last night? Yes, it's that man again!: 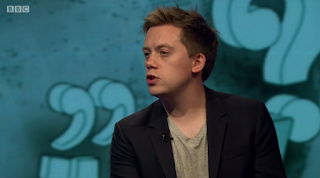