Was "We are British Jews" a racist endeavour?

Was the creation of ‘We Are British Jews’ a Racist Endeavour?

Before I read any other reviews of “We are British Jews” I’ll just dash off my initial response. It might be a rant.  Oh, and before I do that, Google came up with this. 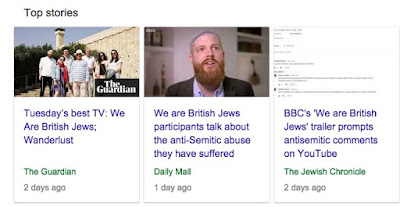 We all knew this programme would be crap “because BBC.” Yes, it was supposed to be different.
The producer..... ‘Asa proudJew myself’.....“To portray fairly what it means to be a British Jew” Yada-yada. (First time ever used that expression)

“We wanted to take our contributors out of their comfort zone and give them fresh insight – but first we had to gain their trust, says Lucie Kon

For ‘gain their trust’ read, “Kon them into thinking the final edit would be refreshingly different from all other television’s intrinsically agenda-driven edits.” Definition of insanity: expecting a different outcome from (doing) the same thing. T'(elevision)was ever thus.

The first episode was relatively benign. The characters were “TV diverse” in the predictable way that TV programmes are wedded to. Take, for example, Muslims Like Us.
You get an extreme one, another extreme one (whose extremism lies in the opposite direction to counteract the first one) a nice one, a nasty one, one that walks out half-way through, one that changes its mind, one that remains intransigent throughout, and one that subsequently gets taken on by the BBC as a presenter.

Absolutely bog standard stuff; inside the box thinking. Then, just as we were about to relax and say “Phew, it wasn’t so bad after all!”  the second episode slaps you in the face. The Israel one.

“Back home after filming, our challenge was to edit the many hours of material we had into two hourlong films – all while the story of anti-Semitism in Britain was creeping up the news agenda. This is complex and nuanced territory, so we needed a device to help unpack it.

We decided to create graphics packages to provide context and to explain the geography, history and politics behind some of the many debates our contributors had.

The graphics add a visually distinctive and arresting layer to the finished films – and deliver huge amounts of insight for those who know little or nothing about the history of the ongoing conflict in Israel.”

Here was the massive flaw. Having been lulled into complacency by episode one, we were fed utter tosh in the form of ‘the geography, history and politics.’ A fantasy scenario where wars just “break out”. The ‘insight’ was rank with the stench of passive-aggressive Israel-blaming. Perhaps they consulted Ash Sarkar for the history.

“So you think the creation of Israel was racist?”
“In my personal opinion, yes. It displaced seven hundred thousand Palestinians”

Absent from the narrative was the important fact that the 1948 war was one of intended annihilation of Israel’s Jews. If there is a racist element in the creation of Israel it lies within the fact that all the Israel / Arab wars have been instigated by Jew-hating Arab leaders. So racist are the Palestinian leaders that they quite openly declare that they want no Israeli, civilian or soldier, in the proposed Palestinian state and that "Jews are filth, they desecrate and defile Jerusalem"

The root of the problem lies within the uncompromising rejectionist position of antisemitic Islam.  There is a huge Islam-shaped hole in the entire antisemitism furore, and its total omission in this particular programme was unforgivable.

Why did the programme-makers choose to make such a feature of an aberration like the religious extremist Baruch Goldstein's horrendous mass killing of Muslim worshippers, but nothing of, say, the Fogel family?  Where, for instance, was Sderot? Where was Islam?  The whole thing was a ham-fisted exercise in false moral equivalence and superficiality.

If you look on Mumsnet (wish I hadn’t) you get a taste of the abject ignorance that abounds. “Why can’t they all stop ‘hating’?“  is a question that is repeatedly asked, as if it’s some sort of mystery. Tell the audience about the Hamas charter, BBC. Go on, risk it.

Throughout the current antisemitism furore, the BBC is behaving as if it hasn’t played a major part in creating this dire situation. The one saving grace is that viewing figures were poor and a bloody good job too.

Labels: We are British Jews