Now, one BBC programme I do look forward to is BBC One's Fake or Fortune?.

Tonight's episode set out a mystery: Who painted this splendid painting of Dido Elizabeth Belle and her cousin Lady Elizabeth Murray?: 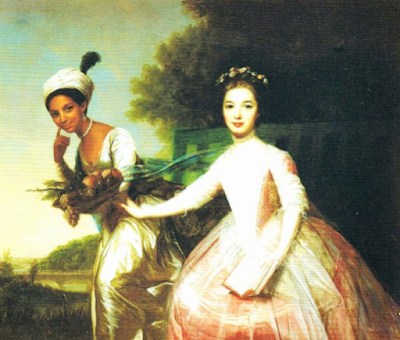 The current Lady Mansfield said, "We actually don't have a clue who the artist is", and Fiona and Philip didn't demur from that, with Philip setting out their intention to "put an artist on that label".

Their "investigation" led them eventually to the name David Martin - a Scottish painter (1737-1797).

Such a shame that Fake or Fortune conned viewers into thinking the artist who painted Dido Belle was uncertain, when researchers proved it was David Martin in 2014.

Dido is currently known because of an unsigned painting, originally thought to have been painted in 1779 by the portraitist Johann Zoffany. Later the family concluded that the artist was David Martin, a young Scotsman.

Yet here was Philip on Fake or Fortune saying they were "searching for clues" without mentioning any of this.

Now none of the 2014 links that I've found backs up the tweeter's claim that "researchers proved it was David Martin in 2014", though they suggest it was believed pretty widely suspected.

Still Philip met a researcher, some 24 minutes into the programme, who mentioned the name David Martin for the first time and Philip looked as if it was news to him. He immediately placed him as one of "two prime suspects" - himself and Sir Joshua Reynolds - and set out to "narrow it down" between them..

Philip ruled out Sir Sploshua just past the halfway point and then began talking in earnest about David Martin and finding "some promising clues" that it could be by him, and Lady Mansfield was instantly persuaded by his reasoning. And, eventually, via forensic experts an so on, the programme declared it was by David Martin...

...as if it was all the programme's own work, starting from scratch.

Was this programme fake or not fake then? Well, it certainly told the story as if Fake or Fortune? found it was by David Martin entirely by its own researches, out of nowhere as it were.

It was "our theory", as Philip Gould put it. "We solved it", said Fiona Bruce.

But that doesn't seem to be the whole story, does it?

That said, as far as I can see, the programme did provide final proofs that had been missing and they convinced an expert, so it was more sleight-of-hand on the BBC's part, perhaps, than outright fakery.

I'm not sure whether I'm entirely reassured by that though.
Posted by Craig at 23:56