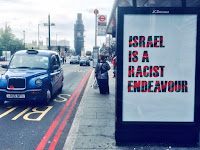 A couple of recent articles cite Labour’s relationship with Manchester's 'Iranian shill' Yasmine Dar. Here’s Sohrab Ahmari writing in Commentary Magazine September 4th 2018. The Rot in the Labour Party.
The first part of his piece is reproduced here, (scroll down) and the latter part includes this, via the Daily Mail: Unfortunately the video 'embed' link is broken, but you can get the drift here. 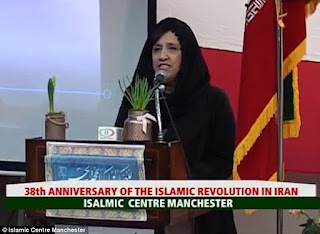 "Some may be tempted to think that the anti-anti-Semitic vote in the executive committee means that body can check the Cobynite fanatics. Except, no. The Daily Mail reported:

The candidate who won the most votes for the Labour party’s ruling National Executive Committee celebrated the Iranian revolution when hardline Ayatollahs took over the country, repressing freedom and human rights…

Yasmine Dar, who was elected top with 88,176 votes, has given speeches at an Islamist celebration of the Iranian revolution in Manchester for three years in a row.

In the most recent, in 2017, she said: ‘We are here for a celebration, a happy time. Thirty-years of the Iranian Islamic revolution. So I’m absolutely happy, it’s the third year I’ve been coming.’

The rot seeps from top to bottom. It’s structural. No self-respecting Briton, Jewish or otherwise, should support this party. 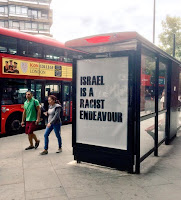 The second piece is by David Aaronovitch (£) and it also tackles Dar’s relationship with the party. A member for only  “five or six years”,  Dar, by ‘popular vote',  ousted Ann Black who had been on the Labour party NEC for “the best part of two decades” and a member of the party for about 40 years.

"I know nothing to the discredit of Dar, save this. For the past three years she has attended an annual celebration of the Iranian Islamic Revolution in her home city of Manchester. At the last one she took to the platform wearing a black headscarf that she does not seem to wear on other occasions, framed by a large picture of the scowling theocrat, Ayatollah Khomeini. She made an unexceptional speech to say she was honoured to be there, how it was important to condemn hatred and intolerance and how nice it was to see “more women than men today”. 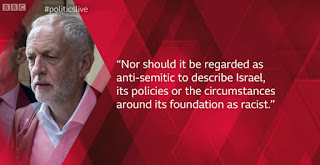 For all John McDonnell’s smooth-talking performance on Politics Live, “we must address the issue of antisemitism in the party” no-one from the Beeb seems to have confronted him with the specific issue of Labour Party members with blatantly antisemitic political affiliations publicly and directly. Correct me if I'm mistaken. 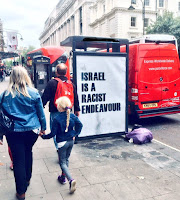 "The main battle now is between Momentum and what might be called Provisional Momentum. It’s pragmatic McDonnellism versus ideological Corbynism, a struggle between those who think a few friendly (if insincere) gestures to mainstream voters are worth making to get Labour elected on its radical economic programme, and those who think even that represents a terrible sell-out.

If this is called ‘pragmatic McDonnellism,’ and we have just 250,000 Jewish British citizens against … coming on for five million Muslim Labour voters, the future looks grim. Yes, the posters are 'unofficial'. Yes, they're being taken down. But someone has gone to great lengths to produce them and fly-post them around London.

Suitcases at the ready.