From this morning's Today... 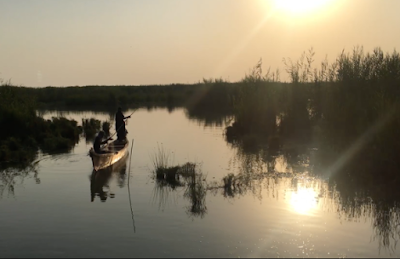 John Humphrys: 15 years ago the invasion of Iraq had just taken place. Saddam Hussein was still on the run. The armed resistance to the Americans and their British allies was just getting going. Nowadays Iraq is struggling with a range of problems, including water shortages and the effects of climate change.

Our World Affairs Editor John Simpson reflects on how the country is faring while the attention of many in the West is turned elsewhere:

John Simpson: The marshes of southern Iraq are some of the most exciting, ancient and visually stunning stretches of landscape on earth, and they are in serious trouble once again.

When I first visited them in 1991 they were just starting to recover from Saddam Hussein's efforts to drain them. When I went back in 2005 they seemed mostly thriving. Now though the villain isn't Saddam. It's global warming.

The two rivers that feed into them, the Tigris and Euphrates, are disturbingly low this year. And although corrupt and ineffectual government has got a lot to do with it, plus some pretty cack-handed dam-building efforts, the real problem began last winter when the thick snows that usually fall over the mountains in the north of the country didn't appear. In springtime the streams and rivers that should have fed the two rivers of Mesopotamia and which make Iraq habitable, even pleasant, were often just a trickle. And when the ferocious Iraqi summer arrived  the water shortages got serious. Temperatures in Baghdad are often in the 40s centigrade from May onwards. This year they were nudging 50 - which, if you think in terms of Fahrenheit as I tend to, is 122 degrees. South of the marshes the city of Basra suffered even more. Supplies of clean water were sometimes non-existent. There were riots and open battles in the street, and only the ferocious heat quieten the violence down.

And yet at the start of this year things seem to be going Iraq's way at last. All the old talk about the country falling apart into its three constituent sections has faded. For now at any rate the pressure for Kurdish independence has eased off, and most Sunnis and Shiites have reached an accommodation with each other. The price of oil has gone up sharply, which suits Iraq very nicely, and there have been improvements in pumping and processing Iraqi oil.

But politically things have been getting worse. Neighbouring Iran is doing its best to control the Shiite politicians, as was bound to happen if Saddam Hussein was overthrown. The Prime Minister Haider al-Abadi has been clinging on to power desperately but doesn't seem likely to last all that much longer.

In only a few more weeks the snow should start falling in the mountains and if it doesn't expect even more trouble next year.

But - and this is a bit of a hobby horse of mine - will most of us hear much about it?

In 2003, and for five or six years afterwards, Iraq and its violence were big news. Nowadays though only the BBC and a small handful of other news organisations maintain bureaus in Baghdad. Getting information about Iraq becomes quite hard, even though Britain and America in particular bear so much responsibility for the way things are there.

But maybe if the marshes start drying up big time even we will start paying a bit of attention at last.