The BBC and half the story 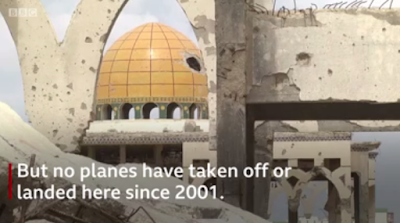 For some reason, the BBC has chosen to put a video report about Gaza among its main headlines this morning, even though seems far from topical:

These are the ruins of Gaza's international airport, Yasser Arafat International Airport, opened in 1998, costing $86 million. But no planes have taken off or landed here since 2001. The runway is scattered with litter from nearby refugee camps. But this place was one seen as a symbol of Palestinian sovereignty. The airport was opened soon after the Oslo Accords, which were a bid for peace between Israel and the Palestinians. But Israeli-Palestinian relations broke down. The airport was destroyed by Israel during the Second Intifada. The International Civil Aviation Authority condemned the destruction of the airport and urged Israel to take measures to allow it to reopen. Gaza currently has no functioning airports.

So why is a report about an airport that's been defunct for well over a decade, and which places the blame for its present state entirely on Israel, a headline story on the BBC News website this morning?

Well, it turns out to be an 'anniversary' piece, as it's twenty years since the airport first opened.

The BBC report bears a curious resemblance to the History section of Wikipedia's article on Yasser Arafat International Airport. It's as if some anonymous BBC journalist clicked into Wikipedia, decided to summarise what it said and then typed that summary across a video of ruins and litter and added music to give it an even greater emotional impact.

What the BBC neglects to mention, however, is that Israel attacked the airport after four of its soldiers were killed in a Palestinian terrorist attack. (In that attack a runway was bombed and several buildings badly damaged.) Nor does the BBC mention that thieves have subsequently stripped the site of valuable equipment including radars, or that the site looks as derelict as it does because Gazans have been 'quarrying' it for years, taking away stones and iron bars to sell. Nor does it mention Hamas, the governing authority in Gaza now for over a decade, which has no interest in cooperating with Israel to reopen the airport.
Posted by Craig at 07:25