The BBC reminds me of Marks and Sparks - failing because it’s abandoned its core customer and is hopelessly striving to appeal to an audience that’s Just. Not. Interested. The youth market. Have you ever wondered why M & S has been ignoring the customers who used to go there for good quality jumpers and underwear? They flocked there from around the globe. Yes they did.

Nowadays the jumpers are mostly made out of polyester and any woollens they do stock seem to pill and bobble after about a day’s wear and the ‘fashions’ are of the kind no self-respecting millennial would be seen dead in. Oh for the good quality merino, Shetland or cashmere jumpers of yesteryear, but in better colours.

In the same vein, the BBC has abandoned the interested audience that hankers after straightforward news reporting -  accurate, impartial and reliable. (And perhaps some who would appreciate informed, balanced opinion and analysis as well)

The ‘we-all-think-alike’ BBC management is incapable of providing the latter and seems to be afraid of producing the former, plumping instead for a load of dumbed-down videos and kindergarten-level ‘explanations’. They’re terrified of handing the audience (which they obviously see as moronic) any kind of intellectual challenge.

While looking for something else I stumbled upon the BBC webpage that featured the video about Gaza’s abandoned airport that Craig mentioned the other day. It’s part of a series of videos that specialise in anti-Israel / pro-Palestinian agitprop.

“A cyclists dream dashed by bullet” was promoted on the same page.

In the film, subtitles provide a handy explanation of the Hamas-orchestrated ‘march of return’: 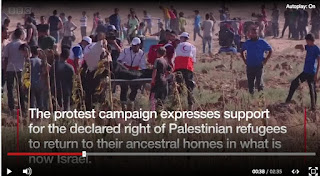 I mean, if you don’t see anything problematic in that, you’d better stop reading this blog. Not to mention the almost comedic hijacking of the term “ancestral homes”. (A deliberate parody, perhaps?)

But then, as I was to discover, autoplay kicked in, whereupon lo and behold, viewers are subjected to a neat propaganda short, titled: The BBC's Paul Adams explains the history behind the anger. 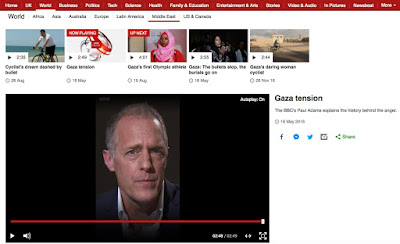 “So what are the people of Gaza so angry about?” […}  “Israel says it’s because they're being manipulated and controlled by the militant Islamic group Hamas”

….with strong emphasis on the word ‘says’.  If you can’t see anything problematic in that, you’re wasting your time reading this.

“But it’s a bit more complicated than that.”

“Egypt controlled it after the 1948 war on the creation of Israel. Then in another war in 1967 Israel occupied Gaza and the West Bank.” […]

“They stayed there until 2005 when Israel finally decided to pull out of Gaza” [..]

“Pretty soon Israeli settlers moved in and set up their own communities.”

Ah, I see where this is going…


“Well, Hamas run the country now after fighting with their more moderate rivals Fatah in 2007. “[…]

“ One of the most densely populated places on earth…..after seventy years they still yearn for their homes across the fence…. The world’s largest open-air prison…. “


Who wrote this script? Was it Paul Adams? Who let it past impartiality control?

Well, no. That’s a lie. I substituted the BBC for the NYT, and in fact, I can remember no such thing. But it’s a nice thought.

Note to self: must remember to turn autoplay off. I still get some stuff from M & S by the way.
Posted by sue at 00:28