Speaking for the Palestinian people

Emily Thornberry being given a standing ovation by people wearing PSC badges after an impassioned speech about defeating racial hatred, and screeching “No Pasaran!” was bizarre. What’s she on about now? Oh, it’s the fascists; like the EDL.

Not sure, but I think she means Islamophobia - she’s bothered about racism at any rate. Palestinian flag, anyone? 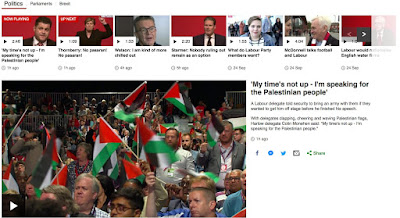 I like the injection of poetry though. It would be a nice touch if the Harlow delegate ended his speech by disappearing like a snowflake in the hot sun. Instead, he enjoyed a warm, appreciative handshake from the leader of Her Majesty’s disloyal opposition.
Posted by sue at 17:40