No soft soap for the President 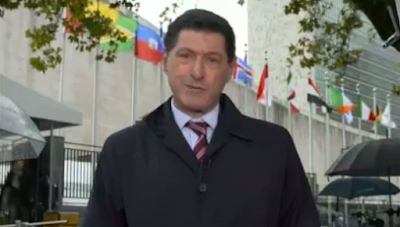 It was followed by that other beauty, Jon Sopel, sneering again whilst mocking President Trump for his UN speech. He has stopped reporting news of events completely and now just gives his personal opinions on the negative aspects of Trump's engagements and he always finds plenty of negatives.


Jon Sopel: When roads are closed for you and red lights really aren't a thing, there's not much excuse for being half an hour late for a journey of less than a mile. But Donald Trump missed his speaking slot this morning and made himself even later by stopping to talk to reporters on his way in. But when he did get under way, he went on a bit of a victory lap, with unexpected consequences.


Donald Trump: In less than two years, my administration has accomplished more than almost any administration in the history of our country. America's... So true. [LAUGHTER]. Didn't expect that reaction, but that's OK.

The audience just giggled. US presidents are occasionally reviled, sometimes adored, but they're rarely laughed at.