Last night's Newsnight featured a discussion about what Emily Maitlis called a "global backlash" to that Australian cartoon of Serena Williams. Here was Emily's introduction to the feature, during which she prejudged the question about to be discussed:

'If the self-appointed censors get their way on our Serena Williams cartoon, our new politically correct life will be very dull indeed'. That was the message from Australian newspaper the Herald Sun which hit back at those criticising its cartoonist, Mark Knight, for his portrayal of the embroiled tennis champion Serena Williams, after his picture met with a global backlash and accusations of racism. When does a cartoonist stray too far? Is this caricature full of racist tropes? Angry black woman - check. Animalised features - check. Exaggerated lips and physique - check. And if you're still not convinced, her mixed-race opponent, Naomi Osaka, had her dip-dyed hair turned full blonde, essentially making her white. The paper says the attack on them is a "politically-correct barrage". Compare to this cartoon in the Evening Standard of Labour's Diane Abbott. Unpleasant, if you're her, but racist? Well, you'd be hard pushed to say so. Now this, from the same cartoonist, of Theresa May. Also unflattering, this time accused of misogyny. And don't forget Kalen Ockerman's East End mural that Jeremy Corbyn at first defended, and then didn't. The artist said it was an attack on Capitalists, not on Jews. And then there's Islam. This was in the Daily Mail, in 2015. Make of that what you will. Joining me now is Tim Benson, editor of Britain's Best Political Cartoons - a book series - and Leyla Reynolds is the Art Director of gal-dem - a magazine run only by women and non-binary people of colour.

It was an odd discussion that followed with Emily Maitlis at times helpfully putting words in the jargon-spouting Leyla's mouth. 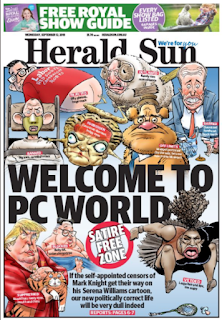 Meanwhile (and will the BBC report this?) it's being reported that the cartoonist at the centre of the storm has deactivated his Twitter account after suffering death threats aimed at both him and his family. Welcome to PC World indeed.
Posted by Craig at 06:06