Regular readers will know the ways in which the BBC use photographs particularly on their News website to deliver a subliminal message about the subject. The recent trend had been to divorce the image from the context of the news story by using stock photographs. This technique has become highly refined as a form of wallpaper or visual mood-music to accompany the ‘news’.

On Sunday 2nd September 2018 there was a sleight of hand on the BBC News website that in retrospect I consider to be blatant bias. At around mid-day there appeared as the main headline story ‘Brexit: May vows no compromise with EU on Brexit Plan’. At first, accompanying this headline story was a photo showing Theresa May looking happy - I think: 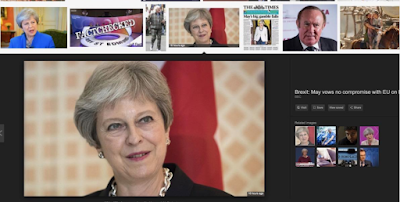 Within a few minutes, this half-empathetic photo of Theresa May had been pulled, substituted by another much less flattering photo showing her as hard-faced and unapproachable:

Look carefully and you will see that both of these screenshots are archived as exactly the same story - I’ll leave you to guess which photo is carried in the archive! On the Open Thread, we joked at the time that the boss of the pics dept must have been away from his/her desk on lunch break and when he/her returned knuckles were rapped and the on-message photo was substituted. The hapless Beeboid who committed this sin would be back on the subs bench in the blink of an eye.

There are many examples of the same type of bias. Donald Trump, Boris, DD etc are routinely shown in an unflattering way. Just use Google Images - BBC Trump for example:

Another recent trend is to show only the face. By concentrating wholly on the face of the subject, clues as to the context in which the photos were taken is suppressed. A photo showing a smiling, carefree, relaxed, confident face gives away little or no information as to why the subject is in a good mood - but that same image can be attached to any news story concerning any subject where the BBC photo editors wish, as in this case, to deliver a positive message. Conversely, an image of a face looking stressed, glum, nervous, confrontational, isolated or lacking in authority might be used attached to a story that in context has nothing to do with the causes of a subject’s dejection or bad mood.

The latest trend is to use non-contextual backgrounds to emphasise the mood-music. A face looking stressed, glum or nervous will routinely have a black or dark background, whereas the smiling, carefree, relaxed, confident face will more often than not be accompanied by a bright colourful background.

Naturally, it is the job of a good pics editor to select images that are best suited to the tone of any news story, but by avoiding any reference to the context in which the photos have been taken, the copy-and-paste application of positive qualities such as earnestness, studiousness, pensiveness, popularity, authoritativeness, empathy etc can be imparted effectively and in retrospect to an image. Equally, by the same process, negative qualities such as derision, flakiness, unreliability, isolation etc can be imparted - at the whim or direction of the pics editor. Incidentally, it looks to me as if these photos of Jeremy Corbyn taken in the The One Show studio have been syndicated with a wide variety of fascial expressions. With its florescent background, I have seen the images all over the MSM including NME.

ITBBCB? has always looked for quantifiable evidence of BBC bias. This technique of the use of carefully selected stock photos, that do not have sufficient context to enable sources locations and dates to be identified, is widespread. It is used to either bolster a person liked by the BBC or to disparage those not in favour. All cameras these days have GPS and date information carried within the image file. It’s not difficult for this basic information to be provided as standard information with photo credits on every published photo.
Posted by Craig at 06:48