He’s always made clear he’s talking about the stress-testing the Bank has done for all scenarios including the very worst case. It’s not his fault if the #looselips in parliament and journalists don’t understand this. Fortunately we do still have some real journalists.

And she then linked to Sky's Ed Conway (tweeting two days ago, as the story was first breaking). His tweets, however, suggest that Georgy may actually have seriously understated the 'lack of understanding' from journalists (including BBC journalists): 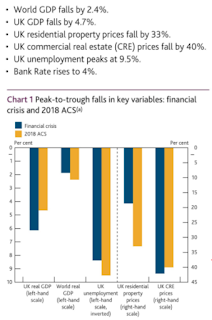 If Ed Conway is correct then lots of lazy journalists with insufficient understanding simply swallowed some leak and then regurgitated it wholesale.

And the BBC? Would they be 'guilty' of that charge too? Well, yes because they led the reporting of the story, and this was their headline about it:

And this is how their online report began:

The Bank of England's governor has warned the cabinet that a chaotic no-deal Brexit could crash house prices and send another financial shock through the economy.
Mark Carney met senior ministers on Thursday to discuss the risks of a disorderly exit from the EU.
His worst-case scenario was that house prices could fall as much as 35% over three years, a source told the BBC.

("A source told the BBC". And the BBC told the nation.)

And BBC Breakfast, on Thursday morning, was telling it like this:

House prices could plunge by more than a third in the event of a no-deal Brexit, according to the Governor of the Bank of England. Mark Carney briefed senior ministers Thursday to discuss the potential risks of leaving the EU without a deal. According to sources, the Governor said a slump in the pound and a rise in interest rates could mean house prices would fall by as much as 35%.

What do you make of this? Is Ed Conway correct? Because if he is then there are a lot of very poor quality journalists out there, including at the BBC, pumping out what can only be called 'fake news'.

And here's where we return to Andrew Neil's tweet because Mark Carney, as reported in (say) the Guardian, is now insisting that he wasn't predicting a no-deal house price slump and that "he set out to cabinet worst-case scenarios used in bank stress tests" - just as Ed Conway said two days ago.

So was this 'loose lips' from Mr Carney the other day followed by a later 'clarification'? Or did the 'sources' cited by the BBC & Co. get 'the wrong end of the stick' and most of the media (including the BBC) simply not have the knowledge or the journalistic gumption to scrutinise the story properly?


P.S. The BBC's Kamal Ahmed 'clarified' the BBC's own reporting nearly 10 hours after the BBC website first published the report by adding an 'analysis' (as Newsniffer shows):


It appears that the Governor wasn't providing the Cabinet with a forecast of what the Bank believes would happen in the event of a no deal Brexit. He was briefing the Cabinet on what preparations the Bank was making if that does happen, including last November's stress test.

It was not a forecast.

It was an apocalyptic test where the Bank deliberately sets the parameters beyond what might reasonably be expected to occur.

Checking BBC One (using TV Eyes) I see that this 'clarification' didn't make into on BBC TV and that even yesterday evening BBC London was still trotting out "Because the Governor of the Bank of England, Mark Carney, says house prices could dip by more than a third if Britain leaves the EU without a deal..."
Posted by Craig at 11:00