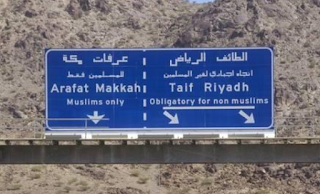 Here's something you may have missed, as I did...

When Channel 4 poached The Great British Bake Off from the BBC, there was speculation that it might hire the hit show’s popular former winner, Nadiya Hussain, as a judge.

Nadiya remained loyal, though, and was rewarded with a deal to make the BBC her ‘home’. Yet now Corporation chiefs have publicly humiliated Nadiya, 33, by axing a two-part BBC1 series very close to her heart — even though it had already been announced publicly with great fanfare.

Called The Hajj, it was due to follow Nadiya from her Buckinghamshire home to Mecca as she joined three million fellow Muslims on the annual pilgrimage to the holy city.

The cancellation comes amid claims that the BBC became nervous. ‘The word here is that senior executives got cold feet about promoting Islam,’ an insider tells me.

‘They felt that if we were going to broadcast a programme about a Muslim pilgrimage, we would have to make one about other religious pilgrimages as well.’


The idea that the BBC "got cold feet about promoting Islam" is quite something.
Posted by Craig at 12:43