"Whether this happened or not..."


Here's another transcript, just for all of you Katty Kay fans (and I know there are legions of you out there). It comes from the BBC News Channel's Outside Source.

I've highlighted in bold some of the choicer passages. The way Katty and, indeed, Ros drop in those little sops to impartiality whilst being anything but impartial and immediately contradicting themselves is almost...almost...worthy of grudging admiration (especially if you're into Machiavelli). 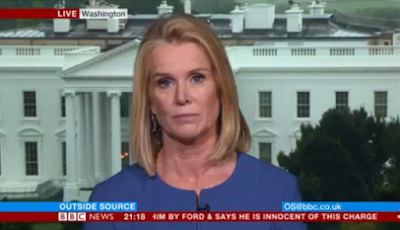 Ros Atkins: And Katty, even if the Republicans do take Brett Kavanaugh's side of the story, does his demeanour have any bearing on their decision? Because a lot of people have been watching this and thinking, this man's not calm, this man is not reflective as you might expect a judge to be, and he certainly is not nonpartisan.
Katty Kay: So, in 1991, Clarence Thomas was accused of sexual harassment by Anita Ford (sic). She gave her testimony and was seen to be very credible. He then came back after her testimony, fighting and very defiantly. He called it a high-tech lynching. He was absolutely furious and angry and he was then confirmed to the Supreme Court. He still sits on the Supreme Court's 27 years later. So it's quite possible...there's a precedent here for a judge to come out and be angry like this, to be emotional like this and still be confirmed to the Supreme Court. We've heard it happen before. The partisan site is interesting because Clarence Thomas did not take on Democrats and the left in the way that Brett Kavanaugh has done during the course of this hearing. I don't think, however, that that will mean that you will have Republicans suddenly saying, oh dear, he's too partisan, we can't vote to confirm him.
Ros Atkins: Now Katty, on the Outside Source screen I've just put up the picture here from the hearing that the New Yorker tweeted out showing the view that Christine Blasey Ford was facing - a raft of white older men - and you and lots of women around the world watching her testimony commented on how the whole experience was profoundly uncomfortable, regardless of whether you believe her story or Brett Kavanaugh's.
Katty Kay: Yeah, I think there would have been a lot of women who listened to the account she gave...and you just played it there. That's I think the fifth time I've heard it, and it's hard to listen to, Ros, frankly, every single time. And I think there will have been women who have been the victims of sexual abuse who will have listened to that and felt a certain amount of PTSD. Whether this happened or not, and we may never know what happened or did not happen in that room, whether this happened or not, her account was very compelling, it was very emotional. I had read the testimony beforehand but it was a punch in the gut to hear it. To hear her deliver it was very powerful and it will have had a big impact on women who've been through similar things.
Posted by Craig at 13:57