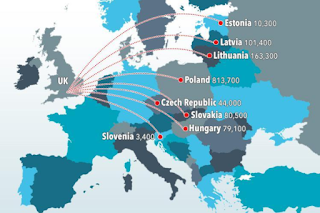 I've finally caught up with an episode of Mark Mardell's Brexit: A Love Story? that I'd missed.

It concerned the Blair government's opening of the doors to mass immigration from Eastern Europe in the the first decade of the present century. Did that push the Leave vote in the Brexit referendum?

The feature was dominated by the views of three 'talking heads' - all remarkably like-minded, except for disagreeing over who was to blame for so massively underestimating the numbers. Two were members of that government - Tony Blair himself and David Blunkett - and other was the professor behind that infamous report predicting just 13,000 migrants, Christian Dustmann. Prof. Dustmann blamed the politicians, and the politicians blamed Prof. Dustmann!

Other than that, however, all three were united in their support for mass immigration and that wave of mass immigration in particular. Even if Tony Blair said he might have done things a little differently in hindsight, they all thought it had, nevertheless, been a very good thing for the country.

And, Mark argued, even if you don't approve of it, that wave of Eastern European migration wasn't the EU's fault. The UK government chose not to put in place an EU-sanctioned 7 year moratorium - unlike nearly every other EU country.

And then, finally, Mark Mardell advanced the argument that, regardless, this open door to Eastern Europe didn't play a significant part in the EU referendum result and that it was a later wave of mass migration instead - the migrant crisis that brought so many to the shores of Europe from the Middle East and Africa -  that actually played a part in the referendum outcome.

I'd have preferred a much greater range of opinions from the 'talking heads' here and far less of Mark Mardell's agenda-pushing. But that's probably too much to ask.
Posted by Craig at 14:06