No Winner Takes It All in Sweden 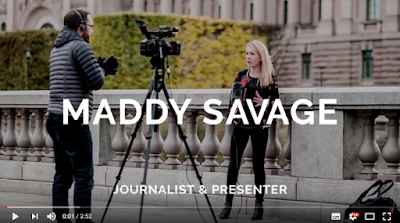 In today’s  Sweden Election, the Left Party could see gains (compared to 2014) almost as large as the far-right Sweden Democrats. But, that doesn’t really fit into “Collapsing Sweden Sees Huge Lurch To The Right” clickbait, so hardly anyone mentions it.

Maddy Savage, one of the three BBC reporters covering the Swedish election (along with Jenny Hill and Gavin Lee), duly replied:

Very valid point. Been trying to include this when I’m interviewed on radio. One left-leaning voter sobbed on me yesterday at a polling station because she’s so sad about rise of Sweden Democrats and wants Sweden to remain “open”.

I heard that report with the sobbing voter on yesterday's The World This Weekend. It was one of those reports which left little doubt about the reporter's own position.

And, checking TV Eyes, I've found plenty of evidence of Maddy doing just what she said she did. For example, on the BBC World Service a week ago today talking of the Left being "up" and talking of "increased support for the Green Party here" due to concerns over climate change, and she was still doing so yesterday:

Something of a curve ball. Climate change has really raced towards the top of the agenda here following the hottest summer on record here in Sweden, resulting in drought and forest fires. That's led to more support for the Green Party and the most left-wing party, the Left.

Well, the Left Party didn't get over 10%, as Professor Christensen was expecting, and Andrew Neil (for one) was noticeably less impressed with the validity of the professor's initial point:

Just as well we didn’t mention it since Left gains were much less than Far Right gains and more than offset by Green losses. SD result well below its own expectations but big enough to make it harder for mainstream parties to form stable Coalition.

And support for Maddy's Greens didn't increase either. It fell.

Re-checking TV Eyes, her World Service interviews overnight haven't included any mentions of what happened to the Greens! She did talk about the predictions that the Sweden Dempcrats might get 25% though.

It looks as is the final results will be as follows:

So, after all the predictions about the Sweden Democrats possibly coming first in the Swedish election, which later got downgraded to them possibly coming second, they actually came third - just as they did last time, albeit achieving the largest leap in vote share (4.7%) of all the competing parties. 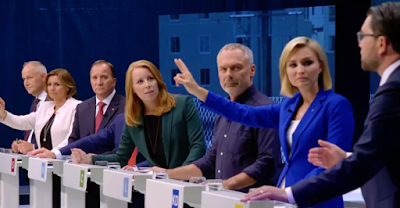 So, yes, the Sweden Democrats certainly made significant gains, have complicated the coalition-making plans of the two main blocs and have put themselves in a potentially king-making situation (if - and it's a very big 'if' - the Moderates, who fell back most, and their centre-right allies, who compensated for them by gaining more ground than the Moderates lost, can bring themselves to swallow the SDs arms-length support). But, at 17.6%, the Sweden Democrats are still nearer one-sixth of the popular vote than the one-fifth (or more) people were predicting.

Still, as Fraser Nelson had been saying at the Spectator (at the start of election day yesterday), thanks to the rise of the Sweden Democrats most of the other party leaders have been "expressing views that they’d have denounced as racist not so long ago". In the process, however, the Sweden Democrats have "lost their monopoly" on discussing immigration-related problems, so "if it flops tonight", he wrote, "this might be why".

So is Jenny Hill, still sticking like a limpet to her original narrative this morning, actually correct then when she says, "The Sweden Democrats have upended the country's liberal tradition" and "Like so many other European countries Sweden, for all its liberal values, has shifted to the right"?
Posted by Craig at 07:27