The first comes from John Simpson on this morning's Today programme:


The exultant voice of Ri Chun-hee, North Korean television's top newsreader. She tells her audience the good news. Apparently even North Koreans find her hard to take. Still, the main thing she announced was - to use a familiar Trumpism - fake news. President Trump had, she said, promised to lift the sanctions on North Korea. Well, no-one knows for sure what went on when the two men were just talking alone together with their interpreters but if he did that really would have been dynamite. Even so Mr. Trump, who'd said beforehand he wouldn't be doing any preparation for the summit, did promise (apparently off the cuff) to stop the joint military exercises which the US has always carried out with South Korea without telling the South Koreans first.


Donald Trump: We will be stopping the war games, which will save us a tremendous amount of money, unless and until we see the future negotiation is not going along like it should.

Until now North Korea has always wriggled out of promises it's made to the Americans and others about its nuclear programme, but, if it suits him, Kim Jong-un could perhaps agree to cut back on his nuclear weapons and even let international inspection teams check that he's keeping his word.


Donald Trump: My meeting with Chairman Kim was honest, direct and productive. We're prepared to start a new history and we're ready to write a new chapter between our nations.

For the leader of one of the very poorest and least democratic countries in the world to meet the American President face-to-face is a fantastic achievement. It wouldn't have happened, of course, if Donald Trump hadn't been desperate for some big diplomatic success. But that just means that Kim Jong-un is lucky as well as daring. But he isn't nice. Already, at only 34, he's ordered the murder of his uncle and, apparently of his half brother too. Hundreds of people have been executed on his say-so, and more than 100,000 prisoners toil under appalling conditions in his labour camps. On Donald Trump's plane home a Fox News reporter daringly put this to him.

Kim Jong-un, for all his youth and inexperience, knows that the North Korean deal will now become crucial to Trump's presidency and that Trump will have to defend just about everything North Korea does and says in order to keep the deal afloat.


Donald Trump: I think, honestly, I think he's gonna do these things. I maybe wrong. I may stand before you in six months and say 'Hey, I was wrong'. I don't know if I'll ever admit that [laughter from audience] but I'll find some kind of an excuse!

History, of course, is not on Kim Jong-un's side. The past 30 years have seen dictatorship after dictatorship fall. His overriding concern is to stay in power. But any autocracy is at its weakest when it starts to ease up. So Donald Trump's promise to make North Korea rich is precisely the opposite of what Kim Jong-un wants. The only way he can survive is to keep it dirt poor and easy to control. So what will the rest of the world make of all this? There can't be a single ally of the United States which feels more confident as a result. And Russia and China? Well, Trump's unpredictability worries them too, but mostly they think it shows how diminished America is now compared with its days as the world's only superpower.

The second comes from Martin at Biased BBC:

MartinW June 16, 2018 at 8:51 am
And on the Today programme this morning another of John Simpson’s highly partisan opinion pieces on Donald Trump, presented in his usual insufferably smug and condescending tone. Notable, as usual, were his sound-bites of President Trump truncated carefully to put him in the worst possible light, and by other careful omissions, effectively broadcasting lies. Simpson again repeating his mantra that the President “reportedly made little preparation” for his meeting with Kim Jong Un, whereas we know from administration reports that such a meeting has been subject of intense Presidential discussions for many months. Again, for example, readers of other (and reliable) news sources know full well that the President’s stated wish to withdraw the military from South Korea is entirely conditional on completely verified denuclearisation of the North (and would obviously have been a matter for prolonged WH discussions between Trump and his military and political staff) but, incredibly, Simpson decided to omit that condition and opine that that policy was apparently made up on-the hoof. Disgraceful. All Simpson’s pieces need fisking line by line and the results published, preferably in a sympathetic newspaper. 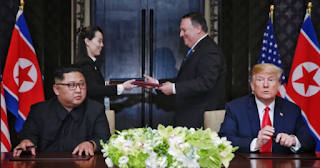 And the third is a piece by Roger Boyes in The Times the other day. (I never quote paywalled Times pieces in full, as it's wrong to do so, so this must be a one-off exception.) It covers some of the same ground as John Simpson's closing section - the bit about Kim Jong-un being on 'the wrong side of history' - but Roger Boyes's piece takes a very different line to that taken by John Simpson. It gives Donald Trump a good lot more credit. It's well worth reading in full and then comparing with the piece by the BBC's World Affairs Editor:

Trump has calculated that Kim is for sale


All leaders can be corrupted, absolute leaders absolutely. The Trump-Kim summit was framed as an elaborate act of seduction. How the 120,000 labour camp inmates must have applauded when they heard on the gulag grapevine that the US president had described their jailer-in-chief as “very smart”, a gifted leader with the best interests of his country at heart. And yet beneath the strategic if stomach-curdling flattery, Trump was playing a more basic game: he was putting in a bid to buy Kim Jong-un.

No one, certainly not John Bolton or Mike Pompeo, had any illusions that a tyrant who imposes ten-year jail sentences on people for watching smuggled western films, who has created a network of secret police snitches even denser than the Stasi, would suddenly turn into a great reformer. That would be magical thinking and neither the hard-nosed US national security adviser nor the secretary of state subscribe to that brand of self-delusion.

It’s a jump of faith to believe that a rogue leader of a hermit state who has used a nuclear programme to grab the attention of the White House would then give up missile development. What happens when he scraps his very last rocket? Will he be pushed aside like Muammar Gaddafi? Or just slip into obscurity? At the very least it would be a betrayal of the legacy of his grandfather Kim Il-sung, who has been mythologised into the greatest of all independence fighters, capable of turning pine cones into bullets.

There is, however, a way of recasting the conversation. Young Kim is a materialist.

The streets of Pyongyang have been changing recently. Visitors report more cars, more mobile phones, more entertainment. New residential zones are being built. These are concessions to an emerging middle class, whose loyalty is as important as the regularly purged military elite. No matter that behind the facade of modernisation there is a widening gulf between the impoverished masses and the relatively prosperous kleptosocialists. It is a system of control, or regime survival, and a path to the personal enrichment of his family.

So the Americans have calculated that Kim is for sale. Trump, author of The Art of the Deal, smelled it first. How then to convert an intuition into a policy? The aim has to be to trap Kim into a process whereby sanctions are lifted step by step. North Korea is bending under some of the heaviest restrictions imposed on any state in the world. For every concession on nuclear containment, a sanction can be lifted. Something for something, the core of Trumpian transactionalism. Until Kim disarms eventually, or pretends to do so, and earns his visit to Washington. There are plenty of problems with this approach but the goal is clear: to make Kim progressively more addicted to western cash than to nuclear weapons. Seen from the White House, that’s the deal of the century.

Sanctions relief has to be used to stop Kim from backsliding in his commitment to denuclearisation but also to nudge the country towards eventual integration into the global economy. The first phase should be to build goodwill and maintain momentum. Kim has promised to return the bodies of American soldiers from the Korean war. A tweak to the current US ban on non-governmental organisations forming partnerships with any branch of the North Korean government would boost humanitarian work there.

The US needs to establish itself in North Korea as the good guy: since kindergarten days northerners have been brainwashed into blaming America for any misfortune. Allowing US charities to work in North Korea to treat and control drug-resistant tuberculosis in the country would be a good start. So would an easing of travel restrictions.

Serious sanctions relief would have to be carefully calibrated with verifiable disarmament. Pyongyang should be allowed to export some coal, seafood and textiles and import fuels and machinery. It is easier to reverse sanctions on commodities than on finances if Kim drags his feet. South Korean commercial investment would be difficult to reverse if Pyongyang was found to be cheating, so only inter-Korean projects should be allowed initially.

The end goal would be full verifiable North Korean compliance with all UN Security Council resolutions on its nuclear and ballistic missile activity in return for the complete lifting of sanctions. At that stage, the US should also make its demands for human rights improvements. Throughout the whole process there will be a constant risk of Kim reverting to the trickery of his predecessors, figuring he can get richer quicker by having a finger in multiple smuggling and money-laundering rackets than in US-sponsored patronage.

Naturally Trump does not mean half the things he said in Singapore yesterday. Without nuclear weapons, a defanged Kim will be a nobody, not someone feted at Davos. But a rich nobody, sleeping safe in his bed. The past weeks, the elevation of Little Rocket Man, were a mere precursor for Trump of the big geopolitical duel with a rising China. If Kim somehow enters the US sphere of interest, then China’s influence in the Far East will start to be questioned, its challenge slowed. If Kim takes the bait, then China loses face.

That would indeed be a prize for Trump. It will come at a price: a spreading uncertainty in Japan and South Korea about the solidity of US security guarantees in Asia. They will learn, as the Europeans and Canadians discovered last weekend, that allies and friends have to wait at the end of the queue while Mr Trump travels the world claiming victories.