Interestingly the BBC News Channel is showing aerial images of both Brexit marches in London - the anti-Brexit People's Vote March and the pro-Brexit UK Unity and Freedom March. 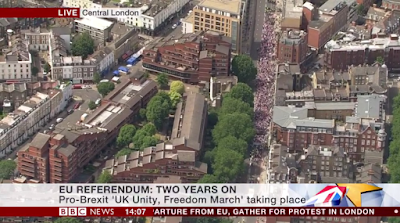 BBC reporter Jon Donnison is at the anti-Brexit march, and all the interviews so far have been with those attending that march.
Posted by Craig at 15:04