Mark Easton has the answer 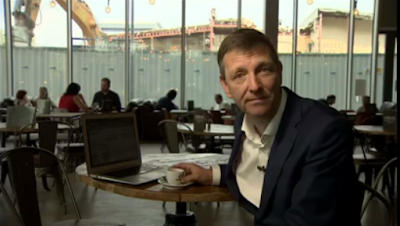 It's been much quieter on the Easton front than I expected this week, but Mark Easton's series of reports on Englishness continued on Thursday.

There was a report on BBC One's News at Ten that night that took us straight back to four years ago, and that previous series of his on Englishness - the series where I felt he behaved much more like an advocate for regional devolution in England (especially for metropolitan mega-authorities and the like) and an opponent of 'English nationalist' calls for a devolved English parliament than an impartial reporter.

The piece, as ever with a Mark Easton piece, had a strong narrative arc. It began with people in Sheerness saying they have no influence over decisions made for their local area and complaining that their council [a Tory-run borough council] isn't working for them. It then moved on to Malvern where various [posh] people, inspired (as Mark put it) by "nostalgia", believe an English parliament might be the answer. And it ended in Stockport where the real answer seems to lie: combined authorities. Combined authorities are popular. And they get even more popular after they begin running local affairs. And they are working. It was a real hymn to regional/metropolitan devolution from Mark Easton there and was clearly intended (I think) to leave little doubt in the viewer's mind that this is the bridge that will help local people feel involved in decision-making in their local area.

In other words, it was a report with an agenda. 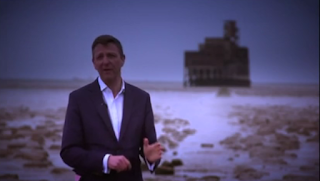 Newsreader: This week we've been considering questions of local and national identity within the UK, how we feel about the past and future for our communities. England, unlike Scotland and Wales, does not have its own parliament. Mark Easton has been speaking to people in three English communities, to find out how they feel about that and if they want to be closer to political decision making.
Mark Easton: The end of the line. This corner of North East Kent on the River Medway was once the beating heart of British naval might, but power and influence have trickled away on the tide of history. Almost 85% of people here feel they have little or no influence over the decisions that affect their local area, and the vast majority say they're disconnected from power both nationally and locally. The geography of Sheerness may help explain the town's peculiar sense of detachment, but across England almost eight in ten people think they have very little or no influence over national decisions that affect their area, and seven out of ten say their link to council decision making is no better.

Sheerness Vox Pop 1: You elect, don't you, the people you want to lead you, but then they have their little meetings and they decide what they want, and I don't really think it reflects too much on what people want. Sheerness Vox Pop 2: I feel a bit cut off, yeah, a little bit, like we're in own little corner of the world. Sheerness Vox Pop 3:You've got one toilet in the town, one phone in the town, it just doesn't work and you can't talk to anybody.

Many in England look enviously at the power devolved to the other UK nations, complaining that English local government has been emasculated as central government has become more distant. Travel to Malvern in Worcestershire, where Sir Edward Elgar was inspired to compose anthems to his beloved England, and there is evident nostalgia for a country more in tune with its rural heritage and more in control of its own destiny. The idea of an English Parliament has strong support in these parts.

From Elgar's green and pleasant Worcestershire, travel north, to Stockport, a town forged in the Industrial Revolution, now being regenerated and where people report a much greater sense of control over their affairs than the England average. Councils in Greater Manchester, Stockport included, pioneered the development of combined authorities - town halls joining together to take on powers previously run from Whitehall. Now they're still very new, but it does seem that people are generally enthusiastic, and nowhere more so than places that already have one. Asked if they'd like a combined authority in their area, 48% of people in England said they would. If you exclude those who didn't feel they knew enough to comment, support rises to 73%. And in Stockport the equivalent figure is 87%. In one of Stockport's old factories - a building that once boasted of being the largest cotton mill in the world - local entrepreneurs are supported as they seek to grow. With power flowing back to the North, optimism is on the up.

Stuart Bradley, entrepeneur: Really creating a sense of unity and energy that was much needed, and yeah, that idea of bringing it away from Westminster and owning that decision-making. Ele Leatherbarrow, entrepeneur: There's definite differences in the north and I think Manchester is a big place for people to identify as sort of a centre of power.

The people of England generally feel excluded from the decisions that affect them and their local area. The connection to power seems too weak. Finding a bridge for that divide is the answer to the English question. Mark Easton, BBC News, England.
Posted by Craig at 09:29