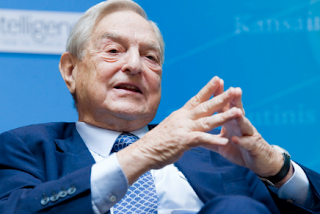 For the first few minutes it sounded as if Edward Stourton's Radio 4 Profile of George Soros was going to be nothing but a hagiography but, towards the end, we did get some brief, dissenting comments - one from the spokesman of the Hungarian government, the other from a journalist whose beef with Mr. Soros is that his Open Society projects (such as the ones in Russia) haven't been anywhere near as effective as they should have been. (Not the usual criticism we hear of the meddling Mr. Soros). Plus we also heard a comment from a friend who described him as a benevolent feudal prince (which could be taken as a criticism or a compliment or a mixture of both).

Ed's language was typically 'BBC' - e.g. In introducing the spokesman from the Hungarian government and describing its immigration policy he didn't just call it "hardline" (in the usual BBC way), he called it "very hardline". ("Hungary has taken a very hardline indeed on immigration and refugees").
Posted by Craig at 11:34