Jon Donnison is back 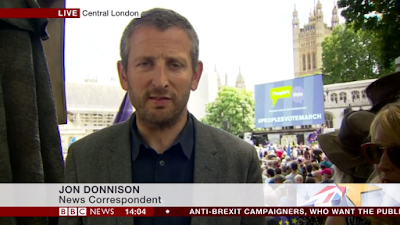 BBC news correspondent Jon Donnison was interviewing a couple of anti-Brexit marchers at the People's Vote March in London a few minutes ago (just after 2 o'clock) and, doing his 'BBC impartiality' bit, asked one of them:

Checking back, he also called Leave voters "the 51%" earlier too (just after 1 o'clock), so it wasn't a random slip.

Was this evidence of bias or just factual inaccuracy on Jon Donnison's part?
Posted by Craig at 15:04