Here's an unexpected one....

Both Sky and the BBC have online reports about the EU's plans to ban internet memes, including such things as the hugely popular 'distracted boyfriend' meme: 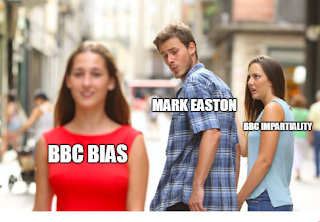 Sky's report gives the critics of the plans their say and then quotes the EU's defence (a well-balanced piece). The BBC's report, however, only gives one side of the argument - the critics' side.

That a BBC report could be totally one-sided isn't, of course, unexpected; but it's being one-sided against the EU is.
Posted by Craig at 12:55