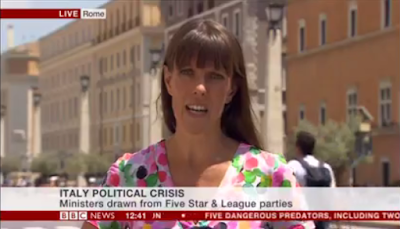 Jenny Hill, the BBC's Berlin correspondent, has been dispatched to Rome to discuss the formation of the new Five Star Movement/League coalition government there.

Her reporting for BBC TV and Radio over the past couple of days has been interesting for its language and its consistency. Monitoring ten different reports and interviews (i.e. ignoring all the duplicate reports in hourly news bulletins), certain words and phrases crop again and again.

For starters, the new government is "controversial", especially its migration policies (which she's called "controversial" six times), and the new government's economic and migration plans are "raising eyebrows" (a phrase she has used nine times). That the voters voted for the parties that espouse such policies and that opinion polls show huge support for such policies is something Jenny glides over without mentioning.

It's also interesting that when she uses the word "rhetoric" it's always in connection with the language used by 'the populists'. (She repeated talks of their "Eurosceptic rhetoric and anti-euro rhetoric", and once of them being "a little bit heavy on the anti-Europe rhetoric"). She never mentions the "rhetoric" of the pro-EU forces, including the controversial rhetoric of Mr. Juncker, Mr. Oettinger et al, which have landed them in such hot water in recent days and which many other media outlets - and, of course, social media - have reported heavily. And it's not just Jenny Hill here. The downplaying of this angle has been right across the BBC. Even the Guardian has reported such unhelpful-to-the-EU stories, so the BBC has, once again, out-Guardianed the Guardian here - a bit of 'bias by omission' which I think provides another piece of clear evidence of the BBC's biased, pro-EU way of thinking and acting.

As for the bone of contention between Italy's president and the two parties seeking to form the new government - the president's refusal to appoint as finance ministry a 'Eurosceptic' academic - well, Paulo Savona is repeatedly described by Jenny as "outspoken" in his views about the EU and the euro. She twice described the man who is now set to be finance minister, Giovanni Tria, as "more moderate", and also called the latter "a rather pragmatic chap" and "a rather more cautious fellow than the original candidate". This is classic 'bias by labelling'.

Not 'moderate', in Jenny's eyes, are the League's migration policies. She called them "very right-wing" on yesterday's The World at One. She said Mr. Salvini's illegal migrant deportation plans "are already raising eyebrows causing huge controversy not just here in Italy but well beyond".

"There's a lot there which is making this country nervous" she said about the new government's programme. (The two parties that comprise it now have around 60% of the vote in the latest Italian opinion polls, so not all of the country must be feeling nervous. Is she projecting her own fears onto the Italian public?)

And if you take the line... 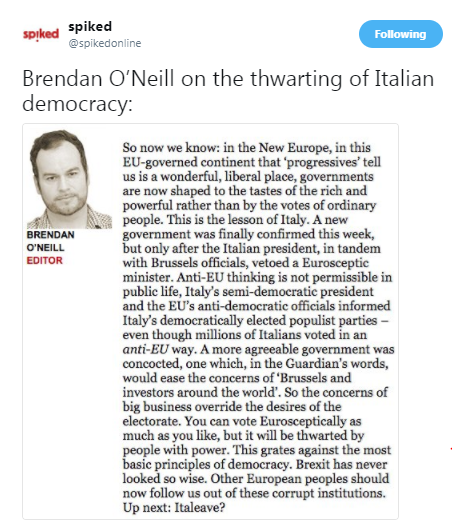 ...that this was "a fight between on the one hand the EU establishment elite in one corner and Europe's populists in the other corner" then think again. Jenny called that "an oversimplified narrative".

And as for criticism of the Italian president, well he got off very lightly. She said she suspected he recognised that "he has made a little bit of a mistake" and, therefore, agreed to the changed list of candidates.

You can always trust Jenny Hill to fling labels around right, left and centre (though mainly right!) and to have a simplified narrative on hand.
Posted by Craig at 11:13