She's not the messiah. She's (possibly) the new presenter of Question Time. 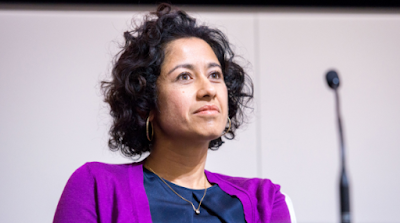 As ever, there's a fine piece by David Keighley over at The Conservative Woman discussing the BBC's obsession with quotas.

David suspects that the BBC will go the whole hog and appoint either Mishal Husain or Samira Ahmed to replace David Dimbleby on Question Time - not because they're necessarily worth it but because they'd tick off at least three quota boxes in one fell swoop! Bingo!!!

(Would anyone be surprised if the BBC did that very thing, and did so for that very reason?)

If so, Mishal's widely-slammed performance during the 2017 general election, pretty much acting as David Dimbleby's understudy, might still scupper her chances.

So cool, calm and collected Samira it is then...

....(though she never seems very cool, calm and collected when she's tweeting about her pet hate Nigel Farage. I suspect he'll be getting far fewer invites to appear on QT if she gets the presenter's job)...

...and she really wants the job too. She's already tweeted her CV: 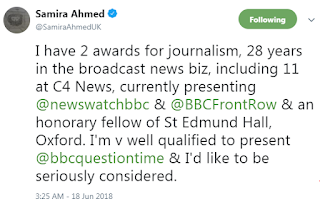 David also discusses the BBC head of comedy Shane Allen's comments that Monty Python wouldn't be commissioned by today's BBC because they are "six Oxbridge white blokes" - comments made as the BBC unveiled a series of new comedy programmes fronted by female and ethnic minority comedians.

One absolutely hideously white python, namely Basil Fawlty (who famously owned a Spanish waiter, so was #FBPE and multicultural even back then), doesn't seen overly impressed with the Shanester (as the BBC's master of hilarity surely calls himself):

It must be said that, with the exception of Mrs Brown's Boys (though it's not my personal cup of Mrs Doyle's tea), BBC TV comedy looks to have pretty much passed on. It's no more. It has ceased to be. It's expired and gone to fresher media outlets. It's a stiff, bereft of life. It rests in peace. If Shane hadn't nailed it to the BBC quota board, it would be pushing up the daisies. Its metabolic processes are now history. It's off the viewing public's radar. It's kicked the bucket, having last been seen alive in the days of Mrs Bucket. It's shuffled off 'is mortal coil, run down the curtain and joined the bleeding choir invisible on multicultural Songs of Praise.

For my personal view on the Question Time issue, were you wondering, I'd scrap it.

P.S. If you wondering whether white, late middle-aged Shane Allen went to Oxbridge, well, no, he didn't. (I will admit to hoping that he did so I could make something of it). He went to Edinburgh University. And his track record, over many years before the BBC, sounds extraordinary. Was he really (as his BBC bio suggests) one of the creative minds behind Ali G, Brass Eye and Shooting Stars?
Posted by Craig at 21:40