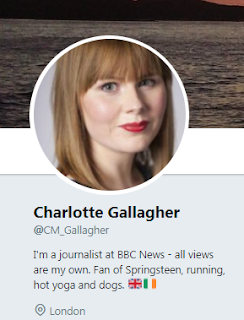 Charlotte Gallagher, Radio 4's correspondent for PM at the anti-Brexit rally in central London, made quite a statement on the programme about the respective numbers attending today's two marches. She said:

Now, there was also a pro-Brexit march taking place in central London at the same time as this one today but on a much smaller scale. We are thinking a few hundreds people were at that even compared to obviously the 100,000 people at the main event at Parliament Square.

How does she know there are 100,000 people at the anti-Brexit rally (as its organisers claimed before and during the event)? Shouldn't she have added some distancing caveats to that, saying that it's only a claim?
Posted by Craig at 17:34