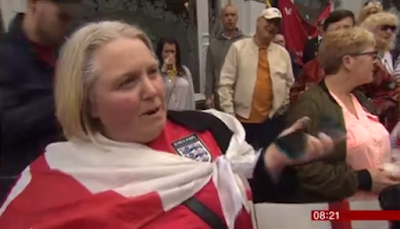 Louise Minchin: It's been very relaxing watching that. Mark is clearly relaxed. He joins us now from Regent's Canal in central London. So are so many things to look at in this, particularly differences between ages and also being English and being British as well?
Mark Easton: That's right. We asked different questions, and one of the questions was how strongly people felt English as opposed to pride. Perhaps unsurprisingly, 80% of people in England said they had a strong English identity but actually, 82% of people said they had a strong British identity. So there's clearly a lot of people who have both identities and feel them both strongly. What's interesting is that there are differences. So, for instance, among the ethnic minority people in England, the British identity remains pretty strong, but the English identity much weaker. That is one of the things about the English identity. It does tend to appeal to people who perhaps have a long heritage, family, ancestry in England. Those people who have arrived more recently or have an ethnic minority tend not to want to call themselves English. That's one of the things we've noticed.
Charlie Stayt: I have two questions for you, Mark: one is do the Welsh and Scots, say, for example, have a stronger sense of identity? And question two, where are Rosie and Jim?
Mark Easton: (laughing) Well, I can't answer the second one but the first one I do know a little bit about because we did do smaller surveys, we did surveys in Wales and Scotland and Northern Ireland  as well as part of this project. We wanted to see how they compared. And it is interesting. So with the English identity, as we have been discussing, the older generation tend to feel more English than the younger generation. Actually, it's round the other way in Wales, where the Welsh identity is stronger among the young than among older people. And in Scotland, the Scottish identity is much, much more common across all age groups. That is strong right across all the ages.
Louise Minchin: And Mark, I'm guessing...What is your assessment? Does all this matter, and does it matter that there are differences?
Mark Easton: I think it does actually. I think that how you relate to the country and how you relate to the people around you, your sense of belonging, your sense of identity, is really, really important. In terms of connectedness, in terms of feeling that you are part of something, part of a wider community that shares your values and principles. And also actually it's about social cohesion. It's about making sure that places work. We need to understand in England the complexities of the identities at work. In this survey not only were we looking at national identities but also things like people's identities around a county or a city or a town or in village or a legendary identity. Tomorrow I will look at people who still believe in dragons and wassails and all of that.
Louise Minchin: Wow!
Charlie Stayt: Who doesn't?! Mark, can I just say I'm not sure you are entirely dressed appropriately for canal boating. I feel you should be something more marine-based...I don't know.
Mark Easton: You've got to understand, Charlie, I'm the captain! I have to look the part, don't you think? I have to wear the suit.
Charlie Stayt: You can choose to wear whatever you like.
Mark Easton: It gives me authority!
Posted by Craig at 17:00