Contrary to an optimistic statement I made in the previous post, you should never put anything past Big Bad Al.

The former Labour spin supremo has been accusing the BBC of "Brexit Dividend propaganda" this morning. (Of course he has. He's got no shame!). It's "the Beeb playing along with Tory spin yet again" apparently.

Unfortunately, he then goes and spoils his own spin by re-tweeting Paul Johnson of the IFS saying there isn't a Brexit dividend. And where was the IFS man saying that? Er, on the BBC.

Indeed, the busy Mr. Johnson has been on both The Sunday Politics and the BBC News Channel this lunchtime rubbishing the claim of a Brexit dividend. 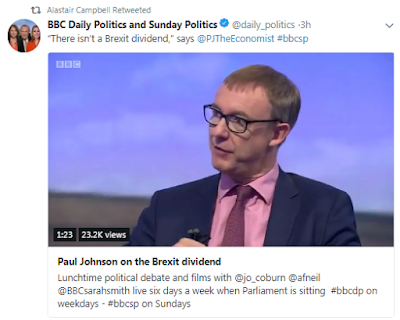 Ah, I see that Rob Burley and Alastair Campbell are back at it again!:

Yes, that's exactly what Polly Toynbee did. And anyone who reads the BBC Breakfast transcript in the previous will realise that BBC journalists haven't been far behind her either.

And the RB-AC exchange continues and it gets madder and madder (on AC's part anyhow):

Alastair Campbell: That was just before Mrs May was allowed to blather on about the Brexit dividend without being challenged on her own impact assessments re impact of all Brexit options on growth.
Rob Burley: What’s that scraping sound? Oh, someone’s moving the goalposts. Again...
Alastair Campbell: Answer the question. I’m sure there has been a long meeting to discuss how not to give it the light of day.
Rob Burley: Where are you on the moon landings?

This will probably go on for a while....

Update: And, yes, Tweedledum later joined it too:


Lord Adonis: Disgraceful BBC parroting of Mrs May’s fictional NHS ‘Brexit dividend’: proof of #BrexitBroadcastingCorporation Alastair Campbell: But @RobBurl said @pollytoynbee dissed it on Marr so it’s fine Andrew. A paper reviewer is now the official rebuttal of lies told by politicians on the national broadcaster. Strange times. Rob Burley: No, you said it wasn’t until late morning you heard the concept being questioned. I pointed out you were hours late. Toynbee questioned it and Marr voiced scepticism in the review and the interview. Sorry but the facts don’t fit the conspiracy/