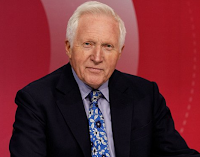 BBC One's Question Time receives a full-scale hatchet job from Sky's Adam Boulton in today's Sunday Times, and David Dimbleby isn't spared either. He calls the programme a "pantomime horse" and wants it put down. It's a bracing read.

He's particularly opposed to "the bear pit element of the programme" which prioritises "heat over light" and involves "the ritual confrontation and humiliation of its guests" by a "self-selecting, juiced-up audience" - an audience that, "for all the BBC’s pretensions", is frequently "in no way 'representative' of British public opinion". He says:

Question Time is a lazy format. Its ugliness has contributed to the coarsening of public discourse.

He doesn't think the would-be ratings-grabbing "celeb add-ons" do the programme (or themselves) any favours either.

There's a lot of truth in what Adam Boulton writes, but the BBC aren't going to drop Question Time (even though I agree they should - or at least drastically refresh its format). The BBC's "veneration" for it is too strong. With a new woman at its helm - and even the Tory culture secretary Matt Hancock is calling for David Dimbleby's replacement to be a woman-  it will doubtless sail on smugly for quite a few more years yet.

As for David Dimbleby, the piece begins with an anecdote that's too good not to share: