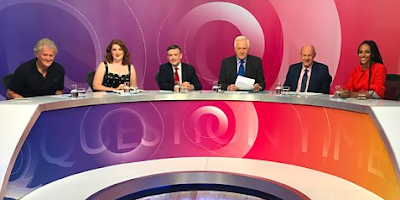 I talked about this afterwards to the lady who vets the audiences [on Question Time]. It's an urban myth that before each show the BBC sends a coach to pick their audience up from the Socialist Worker's Party Social Club, Hizb ut Tahrir and the EU Commission. In fact – and I totally believe this – they are rigorously screened and pre-selected to reflect the political spectrum.

I am one of the few people who can’t really complain about the editorial policy of Question Time having been on it 26 times since I was first elected in 1999. In terms of the coverage it gives Ukip I have found it fair and in the past few years the programme has even started accepting Ukip panellists other than me!

But there have been a couple of programmes in which my colleagues and I have faced a hostile audience which in no way represents how Ukip is normally received or which are representative of the opinion polls. I am not pointing the finger of blame at the QT team but the question I want to ask is whether the Question Time audiences are being exploited by the hard left?

I’ve often heard conservatives complain that the BBC packs the audience with lefties so they’ll jeer and hiss whenever the Tory on the panel uses a stock phrase like ‘long-term economic plan’. Not true. The makers of the programme bend over backwards to try to ensure the audience contains a broad cross-section of political views. By definition, a majority of them won’t be Conservative voters, so in all likelihood I’ll be given a hard time. But that’s the country’s anti-Tory bias, not the BBC’s.

And now comes Charles Moore, writing in the Spectator:


In the entire time I have done the programme — more than 30 years, starting under the great Robin Day — the left in the studio has been noisier, and usually more numerous, than the right. The difference between then and now lies in the left’s degree of organisation. Nowadays, you can tell as soon as you go on if there is a coordinated left-wing claque in the room (about 50 per cent of the time, there is). They tend to sit together, have common points ready and make the same sound of righteous shock at anything ‘unacceptable’. It would be interesting to see whether this planned intimidation would still work if the BBC made everyone present give up all mobile devices at the door. A programme called Question Time does need an audience which wants to listen to the answers.

It continues to intrigue me that, though each of them has a somewhat different take on why the audiences on the BBC's Question Time appear so overwhelmingly biased towards the Left, they all seem to agree on one thing: that the people who produce Question Time for the BBC aren't to blame.
Posted by Craig at 11:40