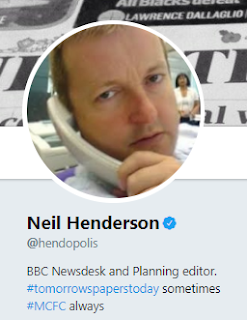 BBC Newsdesk and Planning Editor Neil Henderson is known on Twitter for his almost daily posting of the newspaper front pages.

He posts an image of the front page with the name of the newspaper and the headline written above it.

It's a service he's been performing for years.

Of course, not all of the Twitter public like some of the headlines. So guess what they do? Yes, they blame him!

This time, however, an attention-seeking former spin doctor also got involved:

Neil Henderson (BBC): SUNDAY TELEGRAPH: NHS to get extra £384m per week tomorrowspaperstoday
Lando Loves Norwich: Brexit dividend = an utter lie. Nice of BBC journos to punt that one out there unchallenged. Holding absolutely NO one to account.
Rob Burley (BBC): Is this a parody account?
Alastair Campbell: No. All too spot on.
Rob Burley (BBC): So you think by tweeting the front page of a newspaper, the BBC is endorsing the words on the front page of that newspaper? Wow!
Jackie Leonard (BBC): Every. Bleeding. Time.
Rob Burley (BBC): I think he knows that's a daft thing to say but just wants to start a fight. Unless, of course, this is a parody account...
Alastair Campbell: Go to bed. Unless you want to stay up to hear me on @bbc5live shortly talking about the non Brexit dividend.
Rob Burley (BBC): I'll go to bed when I choose thank you very much! Actually, I am, er, going to bed. Better quality control with the BBC bashing tweets please...
Alastair Campbell: Ps glad you recognise that all my precious Beeb bashing tweets justified and properly quality controlled.
Rob Burley (BBC): P.S That's a stretch.

The funniest thing there, of course, is that Beeb-bashing Alastair was just about to go on the BBC yet again. #bbcbias


UPDATE: Here's an absolute gem demonstrating the find of idiocy Neil Henderson finds himself facing. He tweets a headline as normal: 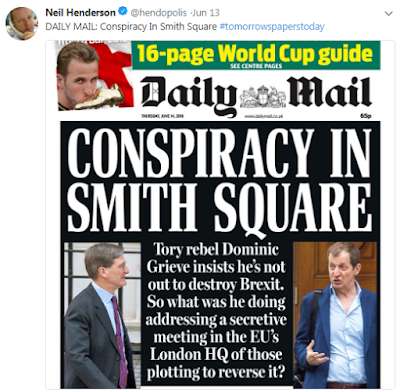 ...and gets this back from an #FBPE type: