This tweet from William Crawley's BBC Talkback programme didn't go down too well: 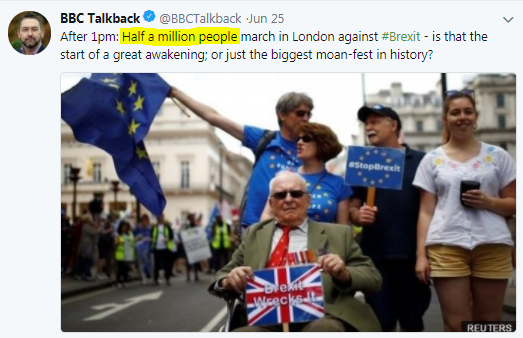 The long thread beneath the tweet illustrates the 'complaints from both sides' fallacy brilliantly:

One side points out that 'half a million people' is a fake figure, as even the organisers claimed around 100,000 people attended; the other side (many with #FBPE after their Twitter names) rails against the programme for using the phrase "the biggest moan-fest in history".

The point, as so often, is that those condemning the BBC for anti-Brexit bias here by asserting a massively inflated turnout for an anti-Brexit march have a genuine point (it is almost certainly utterly fake - probably out by a factor of five) while those condemning the BBC for pro-Brexit bias by moaning about the "moan-fest" phrase don't have a genuine point.

Here are some examples from both sides:

Quite how such people missed that and managed only to notice the "moan-fest" bit is a question perhaps best left to psychologists (or psychiatrists).
Posted by Craig at 06:45