Mark Easton goes sailing on the canals of England 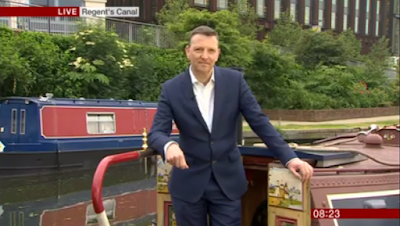 It doesn't seem like four years (yes, time flies!) since the BBC's Home Editor last toured England, campaigning against an English parliament and promoting regionalism in the wake of the Scottish independence referendum.

Now, of course, he'd say that he was only reporting the issue of English devolution but it sounded like out-and-out campaigning to me - as you'll see if you click the three links below (from 2014):

I was not impressed at the time (to put it mildly). And, for me, it still ranks as one of the worst pieces of biased reporting I've ever come across. (And, to rub salt into the wounds, it went on for an entire week.)

And now here we are, in June 2018, and Mark Easton is touring England again looking at the question of Englishness. (And, yes, he's going to be doing it for an entire week once again!)

At this point I'll quote one of MB's most recent comments on the open thread, as it is spot-on (in my opinion):

Mark Easton indulging his obsession about English "identity" (he don't like it) and wasting millions of pounds of licence fee money on his vanity project:

The English question: What is the nation's identity?

His stunning conclusion after all this scientific and very expensive research:

"...the interlaced English and British identities remain an important part of how the people of England see themselves. For many it seems the two are almost interchangeable, reflecting an enduring loyalty and love for the nation, its story and its values.

Being English is more than a factual statement about place of birth or citizenship. It is an attitude and a state of mind."

And this expensive project truly is Mark Easton's brainchild. He's been campaigning for it for ages. It evidently matters to him deeply:

So, as there's always an angle with the BBC's Home Editor, what is it this time?

Or, to put it another way, what's he up to and why is he so passionate to be up to it?

But, as one of the BBC's canniest biased reporters, he's never going to come out and say such a thing directly.

It will take time and patience to unpack what he's up to over the coming week.

Now, yes, when I heard what Mark Easton was reporting on this week I immediately expected the worst (I've seen and heard and read too many of his pieces to expect otherwise) but, in the true ITBB spirit, I genuinely hoped to be proved wrong and to be able to give him the thumbs up (with a special merit mark for 'most improved BBC reporter') - especially as that meant I wouldn't have to spend hours chronicling his biasl!...

...but I've seen and heard this first two reports (one on TV, one on radio), and any such hopes have evaporated.

He's doing what he always does and it's my intention to track it even more closely than I did four years ago (or die in the attempt like a true Englishman)..
Posted by Craig at 15:59