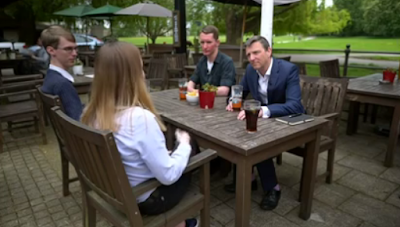 (Clip of Flanders and Swann's A Song of Patriotic Prejudice)
Mark Easton: It's more than 50 years since Flanders and Swann parodied English nationalism but it still may come as a shock to some crunching upon their toast and marmalade this morning that only 57% of people in England regard their Englishness as a source of pride. Among those who vote Conservative or are over 65 or supported Brexit, yep, three-quarters of them are proud to be English. But for Labour and Lib Dem supporters, the under 25s and people who voted to remain in the EU less than half professed to feelings of English pride. Englishness divides the nation, by geography, ethnicity, education - and by age. The younger you are the less likely you are to feel proud to be English. Residents of university towns are particularly unlikely to sing about their relationship with England. Cambridgeshire along with Oxfordshire emerges as one of the least strongly English counties, and floating gently down the river Cam amid the swans and the skulls in Cambridge city are clues as to why. The survey finds that 10% of young people and 10% of graduates are embarrassed to describe themselves as English. The question is why. Why do younger more educated people feel uncomfortable about expressing their pride in being English?

Mark Easton: At the Fort St George Pub I'm joined by Catherine, by Josh and by Lewis who are all, in one way or another, studying English history or literature or certainly part of the English experience. I'm interested, Catherine, do you feel strongly English?
Catherine: I think I would tend to say that I felt quite strongly British. I've grown up very much in a discourse where that's the word that we use. To say that I was English as opposed to saying I was British would be a mark of exclusivity as opposed to one of inclusivity. When patriotism or nationalism becomes a code for prejudice I think that's when it becomes problematic.
Mark Easton: Josh, what about you? How does Englishness fit with your identity? Do you feel more comfortable with a British identity?
Josh: I mean I use them interchangeably even though I think they're different. But I think sometimes you do get a bit conscious when you say you're English. You need to watch the faces on the people you're with then see how they react and then, OK, maybe I shouldn't say that more than once.
Lewis: I think Richard the Lionheart is a poor icon , a very poor representation of what Englishness is and could be be taken to be. It's a supremacist view. It's a violent look at the past. He does not represent the values or what I hope and take to be the values of the society we no live in. If you're looking for a better example why not someone like William Beveridge, humane academic, social reformer, one of the founders of the welfare state. That's...I think that's a vision of Englishness that that it would be far, far easier and and better to get behind.
Josh: You don't need to wave a St George's Cross and have a pint of ale and say, "Look at me, I'm English." You can just say, "I'm English," as normal as that. People might say that that's about as English as you can get.
Josh: I have to admit I don't think it does. It's difficult to say what this identity would be that can unify people from John O'Groats in Scotland to Istanbul in Turkey.
Catherine: I must say I felt part of a true European community in the wake of recent terrorist attacks in various countries in Europe. where countries made a commitment to show solidarity to one another, lighting up buildings with specific flags and things, and that really made me feel...
Mark Easton: (interrupting) You felt 'I'm with them'?
Catherine: Absolutely. And I felt supported. I felt like I was in a shared kind of community. I thought that made me really think about my identity actually.
Lewis: We're a far more global community now. I think I have an international identity. I have a European identity. A European identity is a nebulous concept - tt's difficult to define. It's difficult to pin down - but it flicks a switch in us all.

Like the names painted on the narrow boats on the river Cam our personal identity is to some extent how we describe our cargo of values and principles. For many in England at the moment the word 'English' does not quite spell out the qualities of the goods in the hold.
Posted by Craig at 17:01