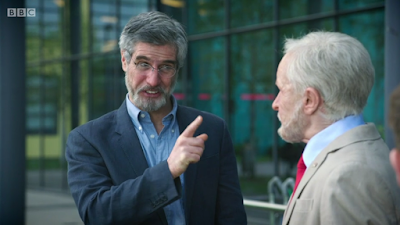 The first episode of the second series of Tracey Breaks the News went after a number of political targets, many of them 'the usual BBC suspects' - Donald Trump, Jacob Rees-Mogg, Michael Gove and Teresa May - plus Tracey Ullman's old favourites, Nicola Sturgeon and Angela Merkel. But...

...there was also a sketch about Jeremy Corbyn:

JEREMY CORBYN: All right, lads. Selfies all-round, is it? Yeah, yeah. All right. Here we are. I'm going to pop the hat on. (Puts on a Corbyn-style hat). Stay on brand. You might want to put that on social media, promote the gig.

JEREMY CORBYN: What gig? Oh, you've been out of the country. We're doing a massive rally at White Hart Lane... ..Recreation Ground. Labour Live. You might want to come along, if you can still get tickets. You CAN still get tickets. Oh, selfies all-round, is it? Ah...(A Jewish man approaches).

JEWISH MAN: I'm very angry with you, Mr Corbyn. You need to do more about the anti-Semites in your party.

JEREMY CORBYN: I hear you. I am all over it like cream cheese on a bagel. It's all right to say that, is it?

JEWISH MAN: Some of the guys you hang around with are very bad people. (The Jewish man walks off).

JEREMY CORBYN: Yeah, well, it's very good talking to you. Right. Bit awkward. But I want you to know that I'm completely on top of all this Jewish stuff, lads. I've spoken to every single anti-Semite in the Labour Party and I've told them, in no uncertain terms, tone it down a bit. Actually, I've always been very careful about the company that I keep. (Gerry Adams approaches).

GERRY ADAMS: How the hell are you, you old devil?

GERRY ADAMS: Well, I always promised myself when I retired from Sinn Fein I'd come to London and do all the touristy stuff - Madame Tussauds, the London Eye... I got a few funny looks at Buckingham Palace, but, sure, what can you do? Friends of yours?

GERRY ADAMS: Quite right too. He's my kind of guy, this fella. A real rabble-rouser back in the day. Some of the stuff you used to say, at those old Bobby Sands commemorations. Lads, will you take a selfie of us?

GERRY ADAMS: I'll tell you one thing, Jeremy was always a great supporter of the Republican armed struggle.

JEREMY CORBYN: I'm going to have to correct you there, Gerry. All I ever tried to do in Northern Ireland was bring about peace. I never supported the military campaign.

GERRY ADAMS: No. And I was never a member of the IRA.

JEREMY CORBYN: Is that the time? Well, could we car share, lads? Yeah, the environment and all that. I'll see you around, Gerry.

GERRY ADAMS: Slan! (Jeremy Corbyn and the lads get into a taxi).

JEREMY CORBYN: You can drop me anywhere. Bit awkward. I barely know the bloke.

TAXI DRIVER: It's me, Ismail from Hamas.

TAXI DRIVER: How are you, my friend? I haven't seen you since you invited me to the House of Commons. It was you, me... those guys from Hezbollah.

That didn't go down well with many of the Corbynistas on Twitter. To put it mildly. A right brouhaha ensued.

There's nothing unusual about that these days of course, but things took an odd turn when one Corbyn supporter sent this tweet out into an unsuspecting world:

I see David Baddiel wrote Tracey Ullman's Corbyn sketch last night. More BBC propaganda masquerading as satire. Tip for Tracey  - sitting in make up for hours to look a bit like Corbyn is a waste of time if you can't do the voice or mannerisms, or comedy.

And then it began!:

Corbyn Conundrum: Baddiel and Ullman have one important thing in common that gets in the way of any attempt at producing comedy. They are both Zionists (like Lipman). They can’t see beyond that.

Simon Maginn: More and more of BBC infested with anti-Labour propaganda. 'Comedy' now, scripted by the disgusting bigot Baddiel, painting Corbyn as someone not concerned about anti-Semitism.  Not funny of course (Baddiel), but also lazy stupid and false. BBC scraping the barrel bottom now.

Abnormal Abner: Just seen a snippet of the Tracey Ullman snipe at Corbyn... written by that (increasingly obvious) hasbara bag of shite .@Baddiel

Pete Best: Baddiel is about as funny as a hernia....told lies about the poll of Labour members on New World Order and now writing similar bollocks for equally unfunny Tracey Ullman.....you are rapidly turning into a one trick pony David.....maybe try something on Tory Islamophobia eh?

This in turn didn't go down too well with David Baddiel and others:

David Baddiel: Been told, hilariously, that Corbynistas like @jigsawman2014 have assumed that I wrote Tracey Ullman's JC sketch on her show: a brilliant example of how they truly eschew the idea of a Jewish conspiracy. #dontgiveafuckaboutfuckingIsrael #howmanymoretimes #cunts

David Baddiel: FFS. This is the literally the weirdest conspiracy theory I've ever seen. I've now seen it stated as fact that I wrote that sketch. Maybe I should ask for royalties. Or will that confirm the stereotype for the anti-semites?

Tracy Ann Oberman: I’ve also had people saying that obviously  Tracey Ullman is Jewish and that’s why she did that sketch. Corbyn’s finest, the lot of them. And he maintains he doesn’t attract racists. She isn’t Jewish.

Nick Cohen: BBC runs a satirical sketch about Corbyn. His supporters fake the news  that David Baddiel wrote it.  That one lie, so easily made and accepted, reveals a whole deformed mentally.

Tracy Ann Oberman: Tonight's an eye opener Nick Cohen - Tracey Ullman labelled a Jewish Zio stooge, David Baddiel the Jew who wrote it .And all by Jeremy Corbyn 's die hard fans. Tracey Ullman is NOT Jewish. Baddeil did NOT write  the sketch. Jeremy's fans call this #FakeNews. I call it racism.

All of you who still aren't on Twitter, are you regretting it now? (I suspect not).

P.S. Guido Fawkes has a post about this now and the BBC has posted most of the sketch on YouTube:


P.P.S. I'm not sure about Tracey's Derek Jacobi-like Jeremy Corbyn impersonation but that toothy Gerry Adams was spot-on and funny.
Posted by Craig at 03:12