Tonight's BBC One News at Six featured the latest Mark Easton report (presumably to be repeated later), and it took off exactly where he left off four years ago - promoting English regionalism to counter English nationalism.

Beneath the veneer of national identity, England is a rich tapestry of ancient allegiances and rivalries.

So, yes, English national identity is a "veneer", apparently (well, according to the BBC's Mark Easton at least).

The "richness" of Yorkshire was described by R Mark, and his vox pop said he'd sooner be a Yorkshireman than an Englishman.

In response to that I'd cite the oft-reported graphic following the 2011 Census: 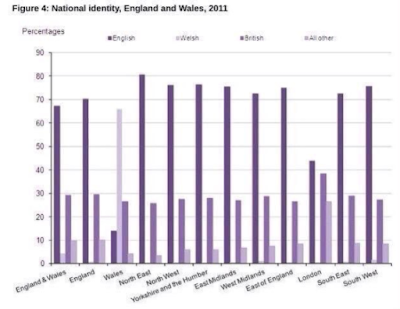 And, just as he did four years ago, Mark then touted England's urban centres (like Newcastle) as another kind of regional identity.

As I thought at the time, last time round, that this fitted in very cosily with established Establishment thinking (Labour then Conservative) about promoting regional/metropolitan devolution in England to counter English nationalism (despite heavy 'populist' votes against it in some local referendums).

This, of course, is in keeping with his his earlier reports this week. To represent the pro-Englishness side of the 'pride in Englishness/no pride in Englishness debate' in his previous TV report he'd gone to a pantomime-like St. George parade in Nottinghamshire, with people dressing up and drinking beer - and juxtaposed them with serious Cambridge students and opinionated ethnic minority Londoners.

Mark obviously likes to keep things simple and stereotypical when it comes to reporting about regional identity in England, even while he's (quite obviously) still promoting English regionalism.

Still, what was his closing point this time? 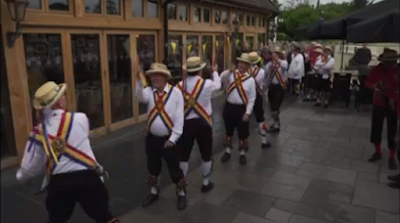 
Newsreader: The people of Yorkshire believe they live in God's Own Country. In Lancashire, they're proud of their Red Rose County. Kent boasts that it is the Garden of England. But which county in England has the strongest identity? For the first time, BBC News has tried to map the local and regional loyalties across England. Our home editor Mark Easton has been exploring people's sense of belonging and local identity.
Mark Easton: Beneath the veneer of national identity, England is a rich tapestry of ancient allegiances and rivalries. In Yorkshire, the medieval emblem of the White Rose is still glorified as a symbol of county pride. As the Tour De Yorkshire cycle race speeds across the East Riding, local schoolchildren are taught what it means to hail from Yorkshire. There are lessons in welly-wanging, pudding races and tug-of-war.

Dawn Joy (Cherry Burton Primary School): The amount of children that have said "What's welly-wanging? what's the tug-of-war?" Well, actually, it's tradition in Yorkshire, so it's just to show them that and have a fantastic day.

[to the strains of a brass band playing Ilkla Moor Baht 'at] Yorkshire, with its own unofficial anthem, has the strongest county identity in England. Locals refer to Yorkshireness - straight-talking, hard-working, friendly and supportive. The Yorkshire identity is rich with the values of resilience and community.

England's urban identities, forged in the Industrial Revolution, are felt equally strongly, none more so than in Newcastle. Iron bridges and brown ale, industry and solidarity.

James Bridgewood (poet): I'm proud to be a Geordie. It means so much to me. I bask in wor uniqueness. Here's a grand old place to be. We are a separate entity, neither Englishman nor Scot. There is no place I'd rather be. Newcastle has the lot.

The strongest identities tend to be those laced with struggle and grievance.

James Bridgewood (poet): We're bonded by hard work and humour in hard times, and I think that brings the community together. John Bridgewood (father of James): Identity has been created by hardship, absolute hardship.

The Newcastle identity's not just about who you are, it's about who you're not. Nowhere in England feels a rival more intensely than Newcastle, and the place that comes second - well, that's a city just ten miles south down the coast...Sunderland.

In parts of England, the roots of identity drink from the waters of the ancient. In Somerset, the Mendip Morris Men dance on the land of the summer people... A dominion of apple blossom that predates England itself, where cider and cheese, dragons and the magical orchard wassail are all part of the story.

England is crisscrossed by invisible ley lines of belonging, identities knitted from strands of history and mystery, timeless, yet fundamental still. Mark Easton, BBC News, England.
Posted by Craig at 21:59