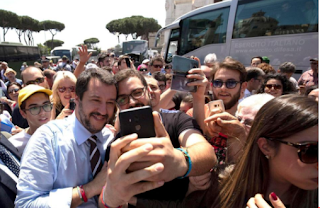 Mark Mardell and his use of language...

Today's The World This Weekend featured the following news report:


Newsreader: Italy's new interior and deputy prime minister Matteo Salvini is visiting Sicily to push his anti-immigration message. The island is one of the main landing point for refugees from Africa and the Middle East. Here's our Europe regional editor Danny Aeberhard.

Danny Aeberhard: "The fun's over" was Matteo Salvini's message to illegal immigrants speaking at a rally yesterday. The leader of the far-right nationalist League party told them to "pack their bags". He said his trip to Sicily underlines that he'll defend Italy's borders and repatriate those with no right to be in the country. He'll visit a port where 150 sub-Saharan African migrants were disembarked on Friday, hours after his swearing-in. But critics point out that repatriating migrants without the agreement of the home countries is extremely difficult and they accuse him of exaggerating a crisis they say is at root a humanitarian issue.

Following on from that, Mark almost said:

As we just heard, Italy's new deputy prime minister and home secretary Matteo Salvini has begun with a trip to Sicily warning immigrants "the fun is over" and "time to pack your bags".

What he actually said was:

As we just heard, Italy's new deputy prime minister and home secretary Matteo Salvini has begun with a provocative trip to Sicily warning immigrants "the fun is over" and "time to pack your bags".

Just one word is all that's needed to change straight reporting into editorialising.
Posted by Craig at 21:40