I usually try to post tidy-looking transcripts, but this one is too long and I'm running out of time today. So please find below a transcript of the part of today's London section of The Sunday Politics, hosted by our old friend Norman Smith.

It's taken straight from TV Eyes, with a few corrections from me. I hope it's still easy to read. The bold bits are Norman Smith speaking. The non-bold bits are his various guests. I've indicated who is being questioned at which point by highlighting their names in red.

This is for those of you here at ITBB who know a lot more about this than I do and will be able to spot any bias (or lack of bias) much better than me here.

Was Norman Smith as factually mistaken about everything as Elizabeth Campbell, from Kensington and Chelsea Council, implied in her often incredulous-sounding responses to his accusatory ('accuse-a-Tory'?) questions?

Did Norman go way too far for a BBC journalist in suggesting that Mrs May "misled" Grenfell survivors (i.e. lied)?

Did Norman's questioning of his two Labour guests provide proper balance? Was he as tough with them as with his Conservative guests?

Here then is the transcript: 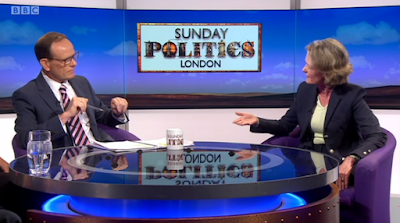