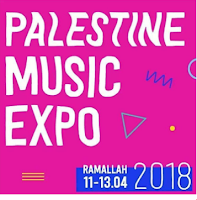 Listening to Thursday's From Our Own Correspondent I heard one of their fairly regular reports highlighting aspects of the Israeli-Palestinian conflict.

(They are much less regular than they used to be though).

Though it probably needs properly quantifying with statistics, I'd say (from consistent but informal monitoring) that a substantial majority of FOOC reports focus on the conflict from the Palestinian angle.

And this was another of those reports.

It featured former Newsnight regular Robin Denselow - now freelance and very much into world music. Here he recounted his experiences at this year's Palestine Music Expo.

BBC Watch have blasted his report for anti-Israel bias.

There's no doubt whatsoever that this was a report which was destined to please pro-Palestinian listeners far more than it pleased pro-Israeli listeners. There was its repeated talk of Israeli checkpoints and difficulties for the Palestinians for starters. And this would have been made worse for pro-Israeli listeners by Robin's repeated citing of views critical of Israel and his report's lack of pro-Israel voices. One sentence from Robin Denselow about the fears of Israeli settlers was the only 'balance' to what really was a thoroughly one-sided report - though that one sentence is bound to be cited by the BBC in answer to any complaint about bias here. And I suspect the BBC would also say that Robin was reporting from a festival that was promoting Palestinian interests so it was inevitably going to focus on voices unsympathetic to Israel. And they'd doubtless then refer the complainants to the concept of 'due impartiality' and how we shouldn't listen to single reports but listen to and judge the BBC's output in the round. (Not that doing that gets most complainants anywhere either!)

Another area BBC Watch complain about here - Robin Denselow's repeated use of the word 'Palestine', in breach (they say) of the BBC's guidelines which tell BBC reporters not to say 'Palestine'  - wouldn't, I think, survive the BBC complaints process either. The BBC would say that every one of Robin Denselow's uses of the forbidden word was OK because (a) one use was because it's part of the music festival's name and (b) it was subsequently used only when indirectly quoting others. Yes, Robin sailed very close to the wind once where it sounded as if he was using the word himself (neat, so to speak), but even that was ambiguous and could also be heard as just him (very) indirectly quoting something a Palestinian said, and it just isn't close enough to the wind to provide cast iron evidence of an editorial breach. (He's an experienced ex-BBC reporter after all. Such people usually know how to try and cover their tracks, bias-wise - if only with fig leafs).

The most startling part of Robin Denselow's FOOC piece, however, was his recounting of an incident he was personally involved in at this year's Palestine Music Expo:

But being seen here with a Palestinian guide was clearly dangerous. A car – apparently driven by an angry settler – narrowly missed our group then did a U-turn and drove back at us again at speed. One record industry executive would almost certainly have been hit if he hadn’t been pulled back.

BBC Watch can't find any substantiating accounts of that incident in either Israeli or Palestinian sources and say "Denselow provided no evidence to support his guess that the car was “driven by an angry settler” but promoted it to BBC audiences regardless." If a complaint was to be made about that, however, I suspect the BBC might say that, using Occam's Razor, "an angry settler" is the likeliest explanation and that Robin Denselow added the get-out-of-jail-free word "apparently". And, given that he was involved in the life-threatening incident it's not something it would be reasonable to expect him to drop from his account.

Still, this kind of FOOC report is typical of FOOC reports from Israel and the Palestinian territories. However carefully-worded (or cunningly-worded even), such reports tend (heavily) to make Israel look bad and the Palestinians look victimised. Positive reports from Israel are rarer than swallows in winter (at the North Pole).
Posted by Craig at 21:39