Meanwhile on a social media platform elsewhere (now going on), the BBC's head of live political programmes is debating with a leading anti-Brexit QC.... 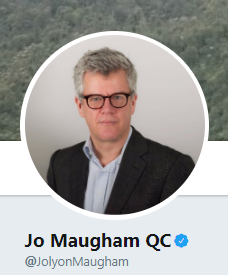 Rob Burley: BBC website must be on the blink: we’re leading with the People’s Vote march, yet also apparently engaged in an effort to suppress said march. What’s going on?
Jo Maugham QC: At least until anyone woke up, eh Rob? How cynical.
Matt Kilcoyne: Is your screen broken Jolyon?
Jo Maugham QC: ‏I think yours must be. Compare Rob's picture with mine.
Rob Burley: I think we reserve the right to change the headline across the day. The fact remains that the Brexit march is being covered. Because we cover the story.
Jo Maugham QC: You're not remotely embarrassed about claiming balance because of leading with the story at 5.37am?
Rob Burley: I’m not remotely embarrassed at all. We will lead with the best story, or its particular iteration, at a given time. At the moment that’s Brexit related, with the march as part of it. Later something else might happen that knocks Brexit and the march off the lead.
Jo Maugham QC: That's not what I am objecting to, as you well know. I am objecting to you claiming, that because you led with a story at a time of day when everyone was asleep, the BBC is unbiased.
Rob Burley: We’re endlessly slandered by you & others for not covering x or y and for “bias”.
I pointed out, yet again, that we were covering the very things you claim we ignore. But headlines change. Yet you build another cathedral of paranoid conspiracy around it. It’s ridiculous.
Jo Maugham QC: No. You claimed neutrality explicitly because it was your "lead". And then you dropped it because "something else happened". But nothing else happened and it was only your lead briefly at Saturday dawn. Those are the facts and your ad hominem attack on me doesn't change them.
Jo Maugham QC: [to audience] Rather than engage fairly and honestly with indisputable facts, the BBC's editor of live political programmes resorts to personal abuse.
Rob Burley: You won’t find any personal abuse. It was your conspiracy theories, illustrated this morning as you dance on the head of a pin around a headline, that I was criticising.
Jo Maugham QC: Accusing me of being paranoia (sic) - mentally ill - is not personal abuse? It certainly is and is quite possibly actionable, Rob. And you still haven't answered my question. You said something had changed to cause you to alter your lead. What changed?
Rob Burley: I am sorry if you took that as a personal attack. I was characterising the conspiracy theories as paranoid rather than the person making them. But as you are at the point of casually threatening legal action, I am no longer engaging with you.
Jo Maugham QC: I'm not casually threatening legal action. I have no intention of suing you. I just want you to answer the question I've posed half a dozen times and which you pointedly refuse to answer. What changed to cause you to alter your lead?
Jo Maugham QC: [to audience] He won't answer the perfectly fair question I've posed repeatedly. He's running away.
naectegale hraevn: In the wrong, so resort to threats of legal action. That's a bit like bullying, isn't it? Certainly an effective way to shut someone up if his career might be at risk. Sledgehammer to crack a nut on twitter - not a good look.
Rob Burley: That’s why I’m no longer engaging with the guy.
Jo Maugham QC: There's no threat. I've said so explicitly. You just don't have an answer and won't admit it.
Rob Burley: [to audience] So Brexit anniversary - government comments and anticipation of the march - leading BBC website currently (I don’t work on the site but I do know leads and headlines change) Guessing the march will be an even bigger part of it once it, you know, actually happens.

That changed BBC main headline now looks like this. It still mentions the anti-Brexit march under the headline and uses an image of an anti-Brexit campaigner: