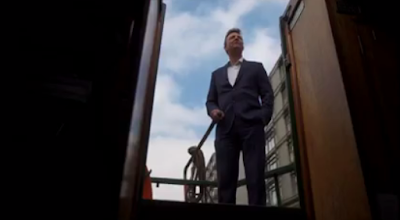 Newsreader: If you live in England, are you proud to call yourself English? It turns out that the answer to that question is influenced in part by your age, how you vote, and what you think about Brexit. The findings have come from one of the largest surveys on identity in England, "The English Question", commissioned by the BBC. Tonight, our home editor Mark Easton goes in search of Englishness, a journey that begins on a narrow boat in the East Midlands.

Mark Easton: Exploring the canals and backwaters of England's identities brings one to Nottinghamshire, as English a county as you'll find. (Crowd singing 'St George in my heart, give me English...'). There's something defiant about the annual St George's Day parade here. A sense that despite England's size and influence within the United Kingdom, the interests of the English people need to be asserted.

Vox Pop 1:  Why, why, why are people ashamed to be English? I just don't understand it at all.

Mark Easton (to Vox Pop 1): You're not ashamed?

Vox Pop 2: Why do we get called racist when everybody else celebrates St Andrew's Day, St Patrick's Day?

On Nottingham's canals, reminders of lost industrial glory. England emerges as strangely wistful right now, and the more English people feel, the more likely they are to be nostalgic for times past. Englishness is a variable quality. While almost three-quarters of the over-65s say they are proud to call themselves English, among the young, it's less than half. It's felt strongly among Brexit supporters, much less so for those who voted to remain in the EU. Navigate 90 miles southeast to Cambridgeshire and people's Englishness is much more diluted. 10% of young people and 10% of graduates say they are embarrassed to call themselves English, and in this city, there's plenty of both. On the River Cam, tie up at the Fort St George Pub, where else, to meet students of English history to talk about what England means to them.

Student 2: Richard the Lionheart is a poor icon, or a very poor representation of what Englishness is and could be be taken to be. It's a supremacist view. It's a violent look at the past.

Student 3: You don't need to wave a St George's Cross and have a pint of ale and say, "Look at me, I'm English." You can just say, "I'm English," as normal as that. People might say that that's about as English as you can get.

The final leg of our journey along the navigable arteries of England and we emerge into the rarefied atmosphere of Planet London. When it comes to identity, the metropolis is just different. In some parts of the capital, like here in Islington, only half of people say they feel strongly English. A similar proportion say they feel strongly European and a third of people here have a strong link with a country outside the UK. London is a truly international city where identities can be discarded, absorbed into lifestyle.

Mark Easton (to London Vox Pop 1): Would you ever call yourself English?

London Vox Pop 2: It's a very diverse, multicultural melting pot of communities that all come together, so you can be any country, if you like, in London.

Being English, unlike being British, is seen as an exclusive identity, an honour bestowed only upon those eligible. That is its weakness and its strength. Mark Easton, BBC News, England.
Posted by Craig at 17:00