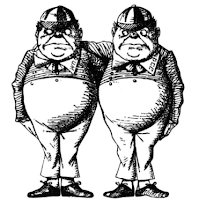 By updating posts from earlier today (which I've subsequently buried under long new posts) I may have I may have inadvertently 'avalanched' myself and disguised the main point of today's posts.

However much Tweedledum and Tweedledee (Lord Adonis and Alastair Campbell) may accuse the BBC of bias (from 'the other side'), their claims of bias (however frustrating they must be to some people who work at the BBC) are surely useful to the BBC as a whole as they seem to give credence to the 'we get accused of bias from both sides so we must be getting it about right' (complaints from both sides) argument.

But in reality they don't give credence to the 'complaints from both sides' argument.

Why? Because the claims of bias from Tweedledum and Tweedledee are demonstrably false. They are fit only for the bin (though they'll doubtless end up in a recycling bin and get recycled ad nauseam.)

There's no substance to them whatsoever. Disproving them is like shooting paraplegic fish in a tiny barrel.

And worse, when closely examined, their fake claims of BBC bias actually steer us towards the monstrous crow of truth: that the BBC is biased in the exact opposite direction to that which Lord Adonis and Alastair Campbell claim it is.
Posted by Craig at 23:10