Nicky Campbell raised a pitchfork-brandishing Twitter mob last night and sent them marching against the Mail on Sunday. His tweet read: "Appalling headline in the Mail Online. Beggars belief".

The headline in question was this: 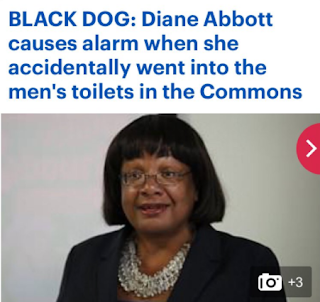 Unfortunately for Nicky, lots of sensible people pointed out that BLACK DOG is the pseudonymous name of a Mail on Sunday columnist and the Mail on Sunday has a BLACK DOG column every week and has done for years.

Of course, lots of less sensible people were already incensed by this stage and weren't for letting this irritating fact get in the way of their outrage. They are raging on.

Nicky, however, deleted his original tweet. He then posted another one (minus any manifestation of contrition):

The answer, regardless of any silly Twitter debate, is that "it's the name/pseudonymn of the column/journalist and has been for years". End of story.
Posted by Craig at 08:49